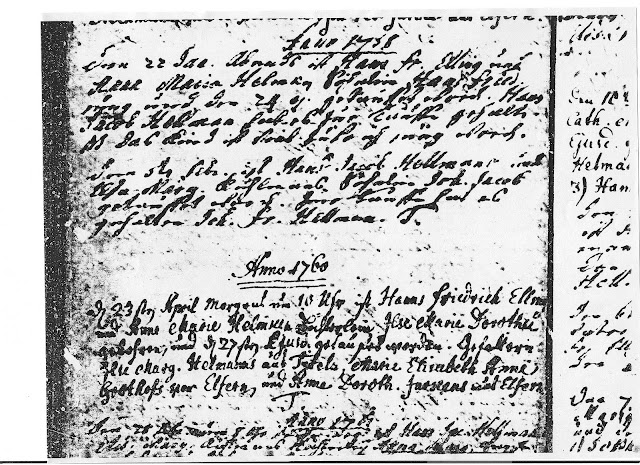 Not out of "stuff" yet! Last on the blog, we learned about Hans Joachim Elling, my fifth great grandfather. His records, thankfully, led to his parents: Hans Friedrich Elling and wife Anna Marie Helmke.

In the parish records of Dushorn, my researcher was unable to find marriage records or burial records for either Hans Friedrich or Anna Marie. The microfilm is not always the best; perhaps if the actual books could be accessed, those records might be located. She stated that the records prior to 1777 were extremely difficult to read.

The baptism records of the parish from 1730 - 1770 were then checked with no success in finding Anna Marie's birth, but Hans Friedrich was located. I do not have a copy of that record, again because it was too poor to copy, but the researcher did extract the data for me.

More luck in that another generation back is revealed.

Also in the Baptism Register, two more children - siblings to Hans Joachim - were found. I have included the copy above, so if you enlarge it, you can follow along with the translation. :-)

From here on, research becomes trickier but not impossible. We can still go back further, but the documentation becomes sketchier. More on that next time!

Posted by Dianne at 4:47 PM No comments:

This was really a special day for me because I found out how to make a Rudyburger!


Dana O. has spoken to me a couple times about her fond memories of going down to my mom and dad's (Donna and Rudy's) trailer at the river and cooking Rudyburgers. I wanted to ask, "What are those?" but I thought I probably once knew and just forgot. Surely the answer would come to me...but it never did.


Then Teresa M. wrote a memory to me yesterday about eating Rudyburgers down along the Maumee with my parents! Ok, too much. I surrendered. I asked. "What the heck is a Rudyburger?" I have to admit that I was expecting a much more complicated answer than I got. So simple.


Wrap a raw hamburger patty in tin foil and throw in into the campfire. When you think it should be done, take it out and eat it. That's it? Yep.

Now I have to try it, but I would think knowing exactly when the burger would be done might be tricky. Do I need a timer? Are there certain sounds that signal doneness? Does the campfire flame turn to a flickering, red color to denote the completion of cooking? Is a Rudyburger always charred past recognition? I think I need a few more instructions.
Any thoughts?


Aren't you glad I told you about Rudyburgers? I'll bet Rudyburgers were especially for kids, don't you?


P.S. You probably think I've put all the family history on already. Nope. I think we can go back even further back into the life of the Ellings...next blog.
Posted by Dianne at 4:41 PM No comments: 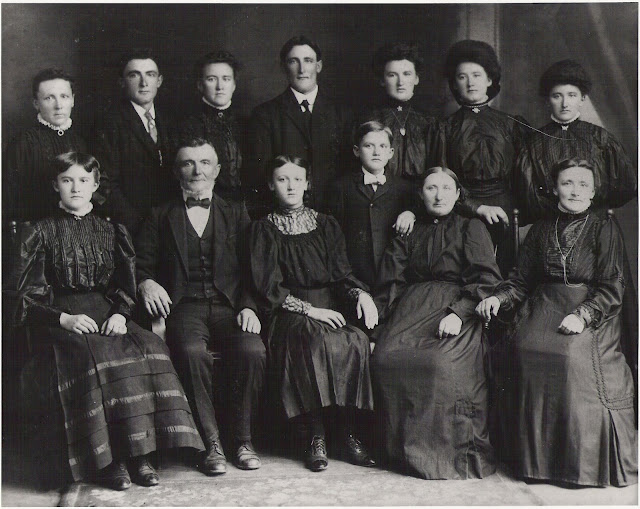 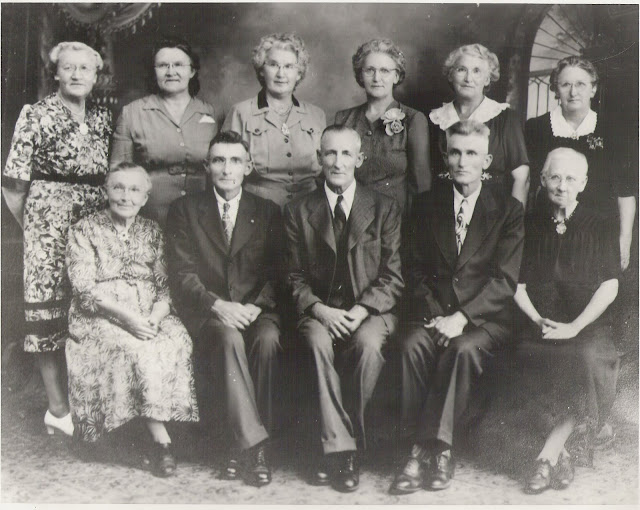 
Since I've told the stories of Grandma Elling and Aunt Kate, it seems the right time to talk more about their family - the Spoerings. My Spoering great-grandparents immigrated from Germany through Bremen on the ship called the SS Main, arriving at the Castle Garden immigration station in New York City on March 6, 1882. On the ship's list for the trip, Henry, age 36, stated that he iwas from Prussia and his destination was Defiance, O.
It is likely that he had friends or relatives from his German town to come to in America. On his naturalization papers, Charles Evers and George Daum gave oaths that he had lived in the U.S. for the required five years and that he was of good moral character. Henry farmed in Richfield Township and at various times also lived in Monroe and Bartlow Townships in Henry County. It is said that he spoke only German.

Mary Floke Spoering was 26 years old at the time of immigration and we know her birth village was Nindorf, Prussia. Mary was born Catharina Maria Benien on October 26, 1855, the illegitimate child of Anna Catharine Benien, daughter of Harm Benien and his wife Gesche, born Meyer. The birth record states that "the illegitimate child is born in the house of the parents of the birth mother." Mary was baptized on October 29, 1855, in St. John's Ev. Lutheran Church in Visselhovedre. No godparents were listed.

A later supplement to the birth record dated May 17, 1861, stated that "Carsten Heinrich Floke, resident of Jeddingen, and his wife Anna Catharina, born Benien, have declared before me, as parents of the illegitimate child entered on this page, and is now to be regarded as a legitimate child who will take the surname of the father Flocke." This was signed by a pastor and noted that it would be placed in the church records.

According to my helpful German researcher, this legalization of a child after marriage was quite common in these times. Illegitimacy rates were high because there were strict laws concerning marriage, especially that the male have a certain level of income before vows could be made.

Posted by Dianne at 4:38 PM No comments: 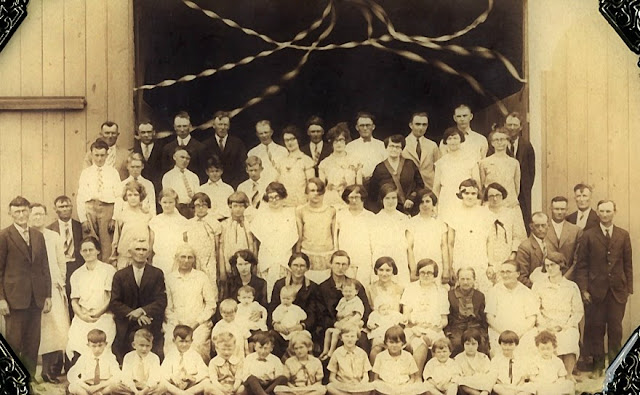 Recently, one of my aunts wrote that the annual Spoering family reunion was going to fold, mainly because of poor attendance. It was getting harder for the older members of the family to complete the planning and work to have it. That is a sad thing, isn't it?

The photo above is of a Spoering reunion that took place in 1926 or thereabouts. From my uncle, I learned that generally the reunions were held in one of the family's barns which was cleaned and decorated for the occasion. Note the crepe paper hanging from the barn rafters in the photo. A carry-in dinner would be held and the leftovers then served for supper. Maybe there would be music, but certainly the kids would play hard all day and the adults would catch up on all the family and neighborhood news. What great memories would be made!

(If someone knows the identities of those not named or if you see a mistake in identification, please let me know.)

Just click on the photo to see a great close-up of those faces!

You don't choose your family. They are God's gift to you, as you are to them. ~Desmond Tutu

I don't care how poor a man is; if he has family, he's rich. ~Dan Wilcox and Thad Mumford, "Identity Crisis," M*A*S*H 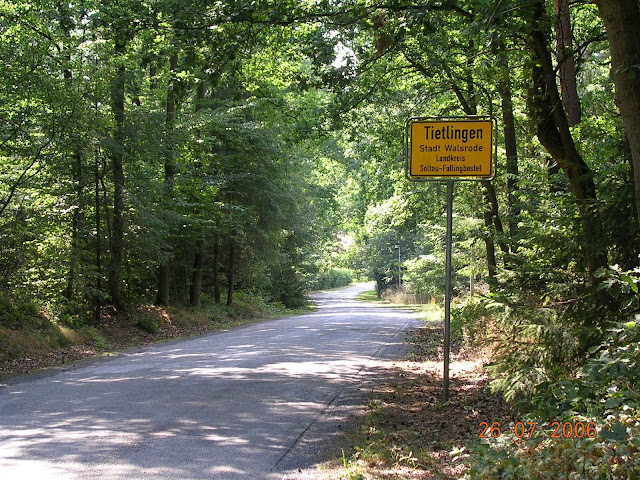 The road leading into Tietlingen. 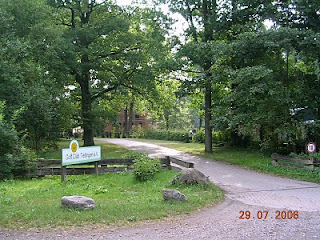 Entrance to the famous golf club there. 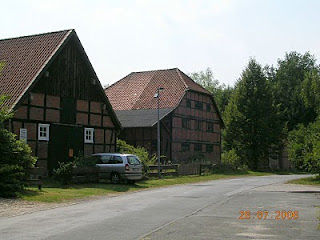 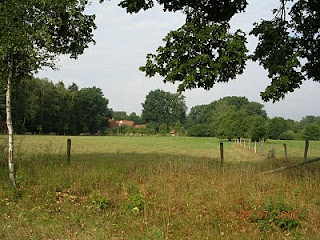 It's been almost four years now since I, by some insane luck, happened to meet Herr Hogrefe, an electrician from Stellichte, Germany, through a post I made on the Stellichte, Germany website. Hogrefe's grandmother was a Fuhrhop from Stellichte (just like our immigrant grandmother). He was familiar with the village of Tietlingen, as well, where the Elling family lived for well over a hundred and fifty years.


Best of all, he generously offered to take some photos and send to me. We may or may not be related somehow way back when...more on that when you see the Stellichte photos - but the kindness of a stranger will not be forgotten.

We definitely struggled with language as his emails arrived in German and I would run them through the online translator, with sometimes humorous results. He was doing the same with my letters in English.

So, with many thanks, I post some of the photos sent by Friedel Hogrefe, Elektromeister, Stellichte.
As always, click on the photo for a better view.
Posted by Dianne at 4:20 PM No comments:

Seven draft registrations took place during World War II.
Most have not been released for research because of privacy reasons, but the mandatory draft of April 27, 1942 - the "Old Man's Draft" for men aged 45 - 64 - is available...and there we find Albert Elling.


Grandpa Elling, then 54 years old and the father of seven children had to go register for the draft, even though these men were not to be liable for military service. His middle name is misspelled by the typist, but again we have his distinctive signature. 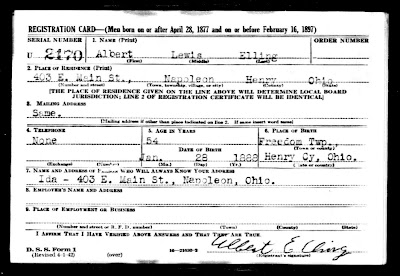 Posted by Dianne at 4:10 PM No comments:

In 1917, the United States declared war on Germany and because our volunteer army was lacking soldiers, a draft was called. On three designated days in 1917 and 1918, all men born between September 11, 1872 and September 12, 1900 were required to fill out the draft registration form. About twenty-four million men registered; however, more than 80% were given exemptions or were deferred and never served.

My grandfather, Albert Elling was one of the men who was required to register and his registration appears above. The June 5, 1917 registration was for all men ages 21 - 31. 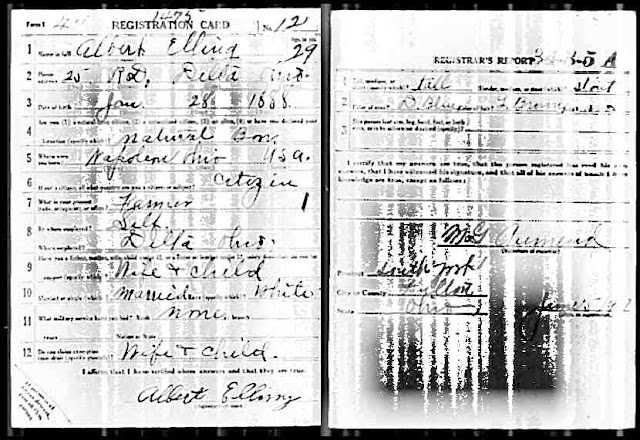 It is a little difficult to read (even when you enlarge it by clicking on the image) so I'll give the details here:

Albert Elling
25 RD (Rural Delivery) Delta, Ohio
Born January 28, 1888
Natural born (as opposed to naturalized citizen born elsewhere) Napoleon, Ohio U.S.A.
Citizen, Farmer, Self-employed Delta, Ohio
Has a wife and child (Paul, born 1914)
Married, white and has no military background
He describes himself as tall and stout with dark blue eyes and light brown hair
Completed June 5, 1917 in Fulton County
And best of all, we have his signature.

Photos and the Story of Stellichte

Schwalshof farm in Stellichte, owned by the Fuhrhops since the 1850's. Shown in the photos are the barn and the street leading up to the farm, as well as the inscription over the barn door. 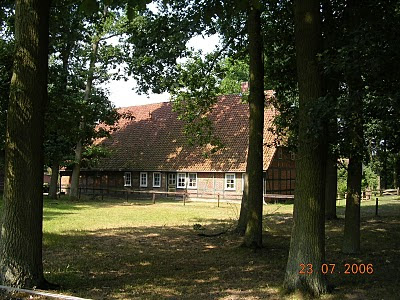 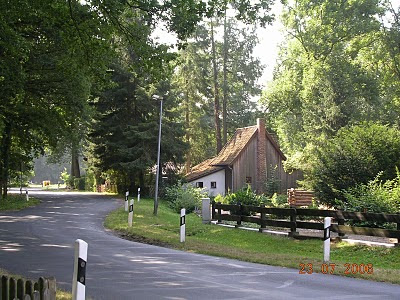 Sometime after his marriage to Anna Maria Engel Fuhrhop (1842) and the birth of daughter Dorothea in Tietlingen in 1847 and before their immigration to America in 1859, Johann Friedrich Elling, our immigrant ancestor, moved with his wife and family to Stellichte, about ten miles from their previous home in Tietlingen. On the microfilm of Court Records for Stellichte 1830 - 1880, I found numerous references to them and to the Fuhrhop family. 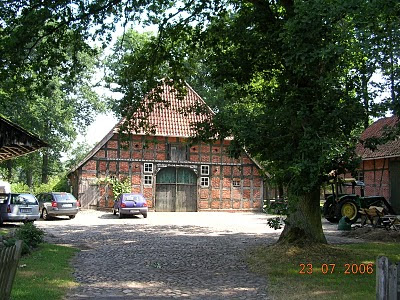 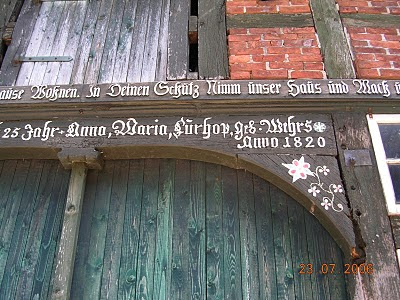 What do we know for sure? The film is poor and I had to ask my researcher in Germany for help in translating, but even I could see quite a number of Fuhrhops show up in Stellichte. In particular, the researcher noted that house/farm no. 2 changed ownership for several generations of Fuhrhops from 1800 - 1857. Otto Fuhrhop, she says, obviously had to compensate several persons in 1857 - perhaps husbands of his sisters - but that one place always remained in the family.


When my friend Hogrefe sent these photos of Stellichte, he told me his mother was a Fuhrhop from Stellichte and these photos above are of her family farm, the Schwalshof farm, owned by the Fuhrhops, he states, since the 1850's. Then I looked at the inscription on the barn and saw that the wife of this Otto Fuhrhop, a name I had seen in the census, was named Anna Maria and we all know how the Germans loved to pass on those names. I really don't know if this farm is related to our immigrant grandmother because I haven't done the necessary research to find out, but wouldn't it be great... 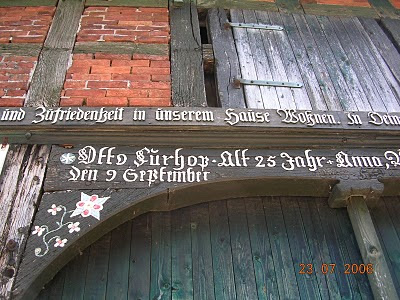 I also know that Johann Friedrich's son, Heinrich Friedrich, my gg grandfather was the only one of the family's children born in Stellichte in 1852. The previous siblings were born in Tietlingen and the youngest was born in America in 1860.

So if someone is looking for a great research opportunity, please take on the Fuhrhops for me, will you? 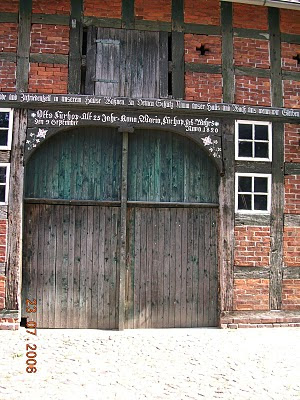