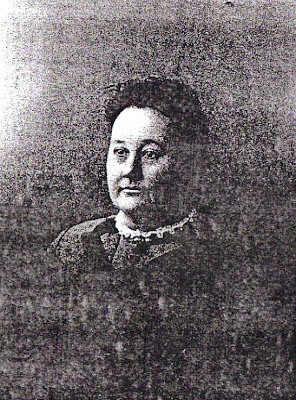 Emeline Doty, George's oldest sister, often referred to as Emma, was born on June 6, 1840 at Raisinville, Monroe County, Michigan.  One of her obituaries noted that Emeline attended school at the Union school and afterward at the old seminary, now St. Francis Orphan Home. After receiving a fine education, she taught school until she was united in marriage.
She married John Foster Colburn on November 30, 1865 and moved with him to Newport, Michigan, just northeast of Monroe, to begin their married life.
Emeline had lost her brother, Charles, in 1865, in the war, and John, too, had lost his brother, George, who died at the Battle of Gettysburg in 1863.  John was a farmer in Ash Township, farming on the family farm; however, he also taught school at times.

Just after Christmas in 1868, they welcomed their first child, Ella.  Sadly, Ella died on August 25, 1869, just a few days shy of 8 months old.  In 1872, John began a new job as a clerk in a general store and in April of that year, their second child was born, a son named George, perhaps after the deceased soldier brother of John.

In 1874, John and a partner bought the general store and again the new employment was marked with the birth of another child, Ellinor Belle, born October 16, 1874.  Soon John bought out his partner and became sole owner of the general store, also serving as postmaster for Newport.
Eldry D., their last child, was born on October 19, 1878. (This name appears as Elroy in one obit, but everywhere else it is Eldry.)

Tragedy struck the family on July 17, 1887, when eight year old Eldry died.  I have not been able to find his death certificate, but would guess that it was the result of some disease, perhaps pneumonia. 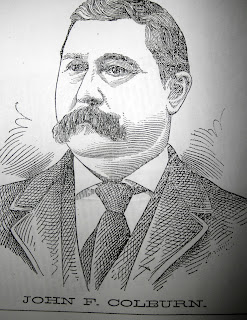 "For the third time in a comparatively recent period, the community has been shocked by the sudden and unexpected death of a prominent and well known citizen.  During the early part of last week, Mr. John F. Colburn was feeling ill, yet continued to attend to his business at Newport.  He went out to his store at Newport Friday morning as usual, still feeling ill, and about eleven o'clock was so much worse that he lay down in his store.  He gradually grew worse and decided to come home upon the first train; he arrived at 4:10 and went in a hack to his residence, but was hardly able to walk into his house.  He grew rapidly worse and a physician was summoned, but medical skill was of no avail.  The doctor pronounced his trouble a stroke of paralysis, affecting his right side.  From sleep, he gradually sank to stupor and at 3 o'clock Saturday morning (11June), a second shock supervened; previous to this he had been partially in possession of his faculties, but afterward did not regain consciousness, and slowly sank until noon of Saturday, when he passed away.

Though for more than a quarter of a century Mr. Colburn has been prominent in business, masonic, and religious circles in the county, yet his life has been a singularly uneventful one.  For more than half a century, it has been passed among and amid the scenes of his childhood.  He was born at Newport, November 12, 1842.  There his entire life was spent.

He worked upon the farm of his father during the summer and taught in the district schools during the late fall and winter.  In 1872 he entered the employ of Joseph Carr as a clerk in a general store; two years later in the company of A. L. Gambee, he bought the stock of his employer and embarked in business; later he bought out his partner and continued the business and was continuously engaged in business in the same place to the day of his death.
On November 30, 1865, he was married to Emeline Doty at Raisinville and established his home in Newport.  Four children were born to them, of which two, a son and a daughter, survive.  Some twelve years ago, in order to furnish better educational and church privileges to his family, he purchased the Reynolds home on the corner of Front and Wadsworth streets, and removed his family to this city, where he has since resided.

Mr. Colburn was long identified with Champlin Lodge, F & A.M., at Newport and was for many years, its Master.  When it surrendered its charter, he transferred his membership to the lodge in this city; he was also a member of the Maccabees and the Royal Arcanum and his death is the first break in the ranks of the Royal Arcanum which has taken place since its organization in this city.

Excepting during the administration of Grover Cleveland, Mr. Colburn had been postmaster at Newport during the past twenty years.  Upon his removal to this city, he and his family became active members of the Methodist church and at the time of his death, was superintendent of the Sunday school; a position he had held several times previous.  The school had made elaborate preparations for the observance of chldren's day with appropriate exercises on Sunday last; but upon the death of their beloved superintendent, preparations immediately ceased and only the ordinary exercises were held in recognition of their sorrow at his loss.
Funeral services were held from his late residence at 2:30 o'clock on Tuesday, Rev. C. S. Eastman officiating and was largely attended, not only by his intimate friends of this city, but by friends from Newport and surrounding county."

John and Emeline's son, George, already owned a home and lived there by 1900.  In the 1900 census, he was living alone in Berlin Township, Monroe, Michigan, working as a day laborer.  Belle lived at home with her mother and, at 25, had no employment.  Emeline, widowed at 59, had taken in a boarder, perhaps a friend of Belle's - Ellen Billmire, 25, a native of Canada, who also had no employment.

In June 1903, Belle married Charles Clarence Rogers and moved to the Philadelphia area with him.  Then on July 12th, her mother, Emeline, died in her home.  Emeline was 63 years old.  She died within 24 hours of one of her closest friends, Mrs. E. J. Newell.

Her obituary appeared in the Monroe Democrat on July 17, 1903:
"Mrs E. L. Colburn
Emeline L. Doty was born in Raisinville, June 6, 1840, and lived there until she moved to Newport after her marriage to John F. Colburn, November 30, 1865.  This was their home until 1887, when they came to Monroe where Mr. Colburn's death occurred June 11, 1898.  Of the four children born to them, two survive to mourn her, George of this city and Mrs. C. C. Rogers of Philadelphia, Pa., a daughter Ella, having died in 1869 and a son, Elroy, in 1887.
Mrs. Colburn had for many years been a sufferer from heart trouble, which of late had been aggravated by intercostal rhematism.  Saturday afternoon she complained of feeling ill and her physician was summoned, but no serious results were anticipated, as she had often been much worse than at that time.

Sunday morning she rose at six o'clock, but decided to return to her bed and after a light breakfast, settled back to sleep.  Some time afterwards it was observed that she had not altered her position and an effort was made to awaken her.  But death had relieved her of all earthly suffering, death occuring at about 7:30 o'clock. Funeral services were held Wednesday afternoon at 2:30 o'clock from the house, which overflowed with sorrowing relatives and friends, a mournful contrast to the joyous merriment exactly five weeks before, when her daughter's marriage occurred.  The funeral services were to her express wishes, very simple and conducted by Rev. Burnett and Rev. Balmer, her former pastor.

All her life she has been a staunch Methodist and she joined the local church shortly after her arrival here.  She was also a leader in the Ladies' Aid Society, having been its treasurer for the past eight years.

Sorrows and troubles, more than her share, she experienced throughout her life.  But her church work, her deep religious devotion, gave her strength, so that her courage never faltered, and she faced earth's cares with a never failing smile and never ceasing cheerfulness that often aided others in gaining courage in their own misfortune."

Up until the 1930 census at least, son George was still single and living alone in Ash Township, Monroe, Michigan, farming.  Sometime between the 1910 census and 1920, Belle and her husband, Charles, moved back to Monroe County with their children, Stanley and Elizabeth.

Posted by Dianne at 3:00 PM No comments:

I have not abandoned the blog because I am lounging, watching "The View," and eating the leftover (??) Easter candy.  (Leftover Easter candy is just a myth anyway.)
You see, a long time ago, I volunteered to enter data for the Hayes Ohio Obituary Index.   I just finished the 1885 Defiance Democrat today, but first I had to proofread someone else’s work, and that took forever.  This is a lifelong project.
Then, I volunteered to help remove five acres of wallpaper from my daughter and son-in-law’s house, not remembering what a stinker of a task that was.
Then the other night, very late, I volunteered to help index the 1940 census for FamilySearch.org/ Ancestry.  I actually am enjoying it.  Only because I know at least one other person checks my work and then, if there is a discrepancy between us, an arbitrator makes the final call. Takes off the pressure.
And Hilton, stop calling here.  I have cancelled the vacation with you…a month ago.  Deal with it.  I do not want to speak to your rep.  In fact, we have another vaca planned with another company, so stop with the calls.
I want to plant things, but it has frosted again here, and so I must wait.  I’ve already been walking through the garden centers.  It can’t be helped.
Oh, yes, and in a fit of late night decision-making, I signed up to review three books for various publishers.  They are arriving in the mail now and they carry with them…deadlines.  Ugh.
But the biggest hindrance to continuing my blogging is that I had to clear off the dining room table so we could eat our Easter dinner.  Hence, I had to gather all the miscellaneous piles of Doty notes/charts/photos and stuff them in a box which I carried upstairs.  Now, to continue, the blog, I will have to retrieve the box, resort the contents and reorganize my brain.
I need some motivation.  Maybe a comment or two somewhere would help me climb those stairs…
Posted by Dianne at 8:46 PM No comments: