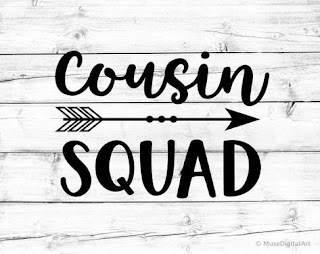 It seems like a struggle to me to classify cousins into first, second, third, once removed, etc.
It was always obvious to me that my first cousins were the children of my aunts and uncles.  You know who you are! We share grandparents.
But who is a second cousin?  They are the children of my parents' first cousins. So if my dad had a first cousin, Eldor, his children would be my second cousins.
Or, in another view, we share great-grandparents.
My third cousin would share a great-great grandparent with me, and so on, adding greats. 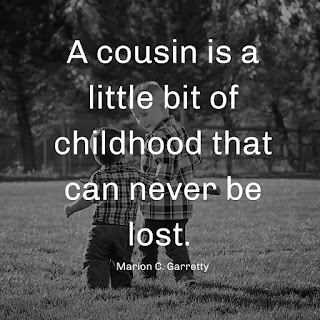 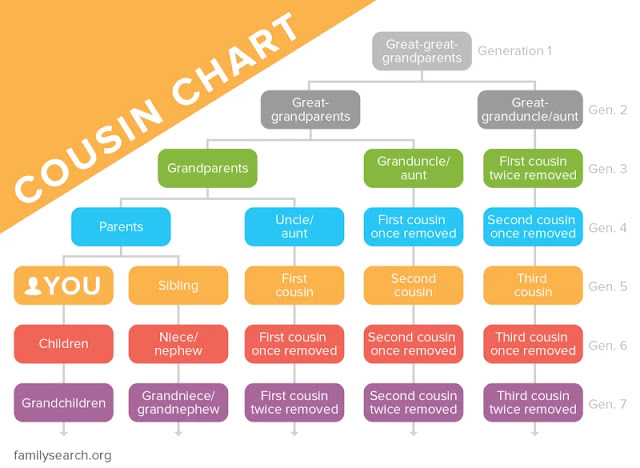 A Christmas Souvenir From Your Sunday School Teacher, Henrietta Delph

During the Christmas and New Year Season of 1902-1903, Henrietta "Sue" Delph presented a little gift to her Sunday School students at the Lutheran Church in Malinta, Class No. 11.

Her photo was featured on the front with the class roll and a few Christmas verses inside. 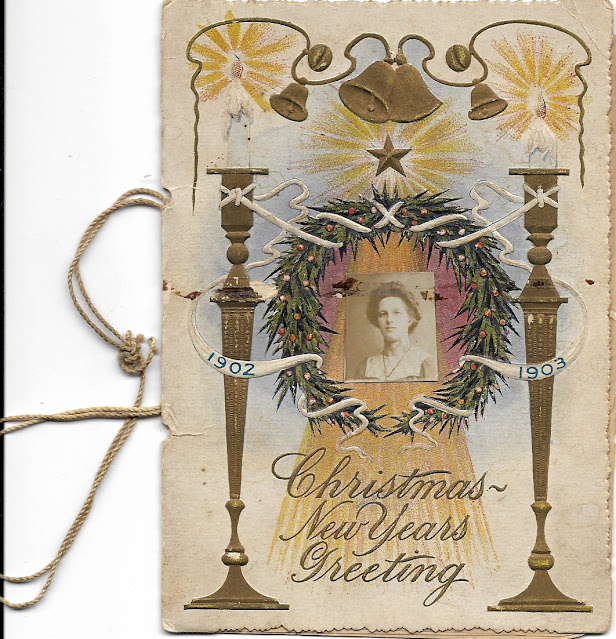 Posted by Dianne at 1:59 PM No comments:

This family photo, presumably taken on the Delph farm, included spouses and grandchildren.  Jim Delph and I put our heads together to label as accurately as possible.  Even then, we could not identify the grandchildren who seem to make up the first row, sitting on the ground, except for the oldest girl which I am fairly sure is Marie Ordway (Baker). 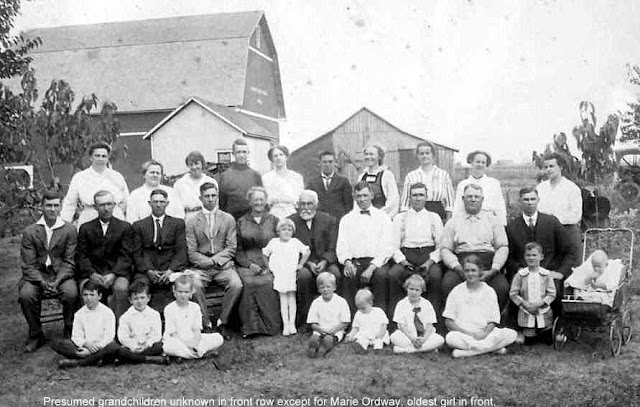 The photo was estimated to have been taken between 1913-1917

From Left to right, naming the men and the women behind them:

Morris Babcock, Jacob Babcock with Cora Delph Babcock behind him

Clarence "Cooney" Delph with wife, Margaret behind him.

Ottis "Pat" Delph with wife, Elsie standing behind him

Mandus "Jerry" Spangler with wife, Julia Delph Spangler behind him.

George Delph with wife, Emma Delph behind him

***If you can help with identification, please chime in in the comments.  Your comments are monitored and probably won't show up for a day or two when approved.

Posted by Dianne at 1:01 PM No comments: 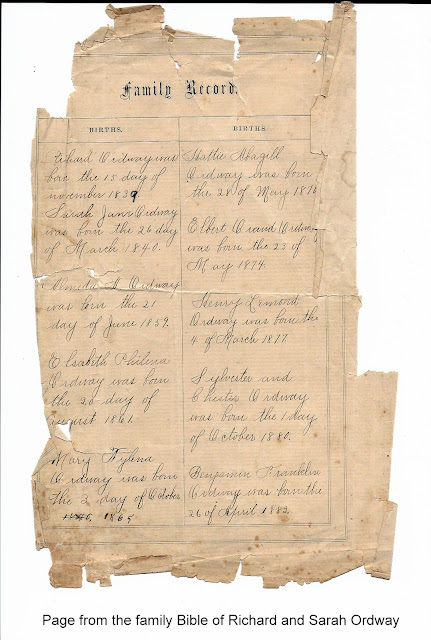 This family treasure was passed down to me from Marie Ordway Baker's son, Robert.  It is one very fragile page of the family record of the Richard and Sarah Hill Ordway Bible, my great-great grandparents, listing their children and birthdates.

I didn't scan the back side of the page, but their marriage record alone rests there:

Richard Ordway and Sarah Jane Hill was married the 8 day of September 1858.

Also with that record was a slim piece of yellowed paper, marked State of Ohio, Wood County, declaring the marriage of Mr. Henry L. Ordway with Miss Lizzie Delp, on January 2d, 1898, signed by Rev. L. O. Thompson, Church of Christ.  My great-grandparent's marriage certificate.  It doesn't get any better for a genealogist. 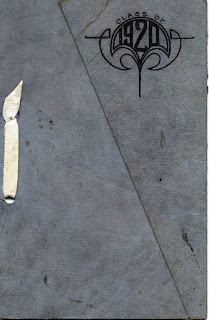 Class of Nineteen Hundred and Twenty

Posted by Dianne at 6:31 PM No comments:

A Ladies' Group in Malinta, Ohio

I'm back to working on my great-grandmother's family, the Delphs of Malinta, Ohio, and Crawford County, Ohio.  Search for the many other posts on this blog related to this family.

Thanks to Jim Delph for the "red box" of Delph goodies that I am working my way through right now.  In the box was this picture of a group of lovely ladies, including my great-grandmother's sister, Henrietta "Sue" Delph.  It was probably taken in Malinta as she was young in the photo, but what group was it?  A choir?  A literary group? A church group?

On the back of the photo were the ladies' names written in what now is a very, light pencil.  I have attempted to transcribe the names, but some were just too light.  Maybe you can help. 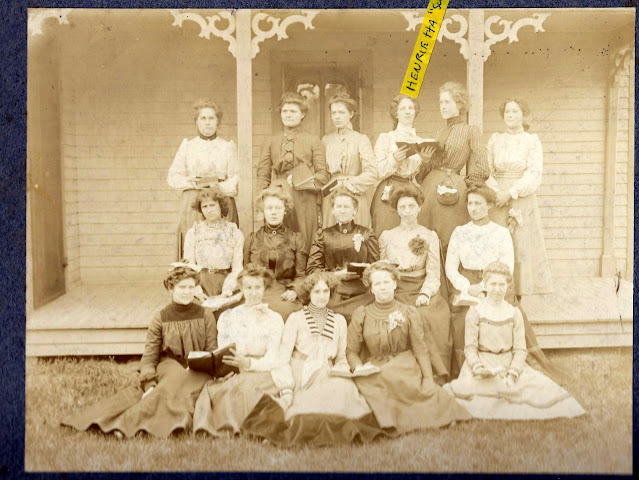 *All comments are reviewed before posting, so they will not appear for a few days until approved.

Posted by Dianne at 7:18 PM No comments:

What Happened to the Headdress? A Spoering Family Mystery

About five years ago, I wrote this post about German Wedding Traditions, brought about by a photo I found of myself, dancing in the hog trough at my younger brother's wedding.
http://attheriverbend.blogspot.com/2017/02/hochtied.html
Then, last month, I was asked to give a program at our genealogical society, and I chose that same topic.  I took some time to really delve further into the subject, especially as it applied to my family.
I looked at three wedding photos I had of three of the younger Spoering sisters -
Lydia, Kate, and Ida, my grandmother.  My first revelation was that all three wore a dark dress, just as they would have in Germany at the turn of the century.  It was all about practicality, and I'm sure those dresses served them many years. 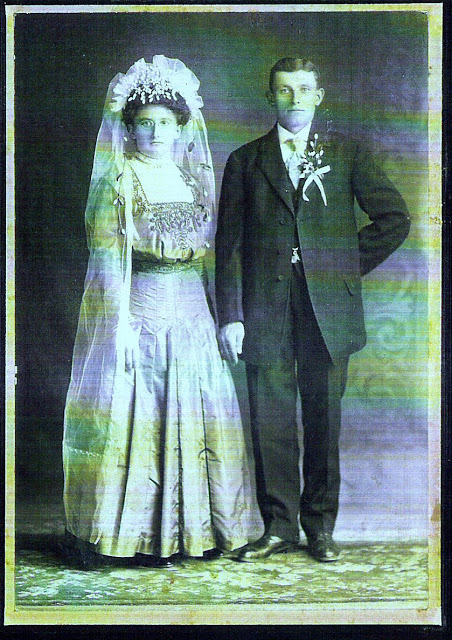 Of the three sisters, Kate was the first to marry Wilhelm "Dutch Bill" Tietje in 1911.  The groom had his best suit on with a large flower stem in his lapel.
The flower is myrtle, representative of love and fidelity.  A close look at the bride's headdress shows the same flower on top and a strand hanging down on the side.
Notice the wide hem at the bottom of the sheer veil. 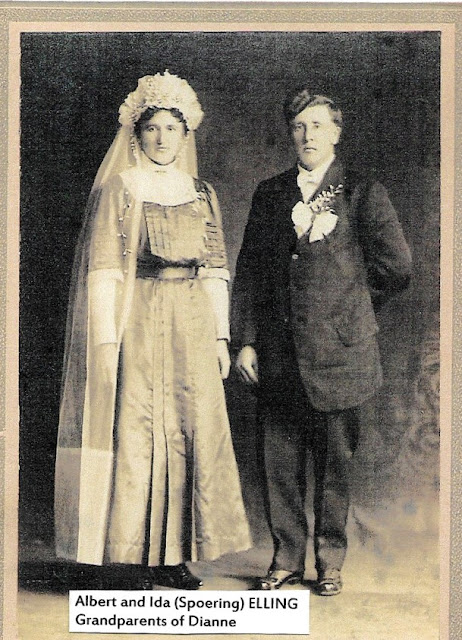 Ida Anna Katherine Spoering married Albert Louis Elling in 1913.  A very close inspection of her wedding headdress revealed that it was the same as in the previous photo, only a little reworked with the myrtle hanging down as before.  The wide hem at the bottom confirmed that it was the same veil.  The dress pattern is the same used by Kate, and it would be a valid guess that the dresses were handmade. 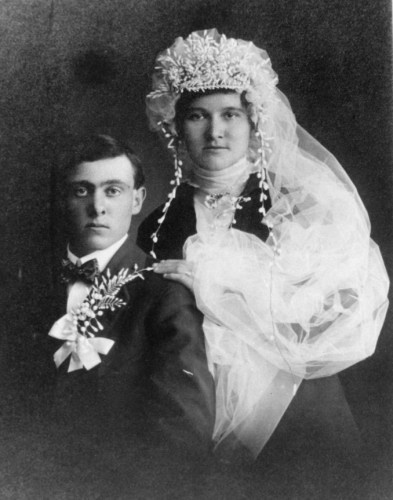 Lydia Spoering married Harry Louden in 1915, and the headdress is the same, although we can not see the whole veil.  Myrtle appeared in both the headdress and the groom's corsage.
As for the other Spoering sisters, I do not have their wedding photos to know if they also wore this item.  I only know of its use from 1911 - 1915. Mary married in 1900; Freida in 1917, Anna in 1903, and Sophia in 1904 and Amelia later. If anyone would be able to share those wedding photos, it would be very appreciated.
Once, long ago, I was told (source not remembered) that the wedding headdress had been preserved and placed into a large frame covered with glass to protect it.  I've envisioned this for many years as a family heirloom that lived on somewhere. I thought one aunt had it, but her son assured me that she did not.
So...does anyone know if this wedding headdress was preserved and where it is?
That is the question to answer.  Any clues or knowledge would be appreciated.
Please comment!  Know that all comments are moderated and so will not appear immediately.  It takes a day or two.
Posted by Dianne at 3:32 PM No comments: