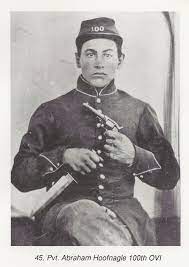 Barnhart Kline III was born to Barnhart Kline Jr. and Rosetta Chapelles on May 22, 1843, in Sandusky County, Ohio.  He was their first son.

Barnhart, known as "Barney," enlisted on August 4, 1862, into Company K of the 100th Ohio Infantry, at 19 years old. On September 8, 1863, his company, inexperienced in battle, led by General Ambrose Burnside, met a Confederate unit, led by Alfred E. Jackson, on the bridge at Limestone Station.  Prior to this the 100th had done a lot of marching, but no fighting.  There the 100th ran out of ammunition and was consequently surrounded by the enemy.  Two hundred and fifty men were captured and placed on a train bound for Richmond, where there were numerous prisons for Union soldiers.

Eighty five of those 100 died in prison in Richmond.  Barney was eventually in a prisoner exchange and, upon his release, made his way to Atlanta and caught up with his regiment there.

On August 4, 1864, Sherman decided it was time to move forward and seize the railroad to East Point.  He ordered Schofield to advance his Twenty-Third Corps, plus Major General John M. Palmer's Fourteenth Corp and "not stop until he has absolute control of that railroad.  The next day only one Union brigade, Brig. General Absalom Baird's, moved forward and seized an entrenched skirmish line with 140 prisoners at the cost of 83 killed and wounded.

The next morning, Schofield ordered part of his corps to attack at Utoy Creek.  By the time the Union advanced, the Confederates had taken a position on a ridge and they were ready.  They had strengthened their works with logs and branches of trees.  Union soldiers had heard the felling of the trees.  Into this entanglement and up the slope came the Union charge, including Barney, and the Confederates opened with heavy musketry and cannon, driving them back.  The Union tried again and was repulsed.  Seventy six men were killed, 199 wounded and 31 captured. against 15-20 Confederate men.  Barney Kline was killed in this battle at Utoy Creek.  After the battle at Utoy Creek, the bodies were left on the field of battle, as there was no time for other than perhaps a quick burial.  Later the Marietta National Cemetery was created and Barney III's body was moved there.  However, the family also erected a cenotaph in the McPherson Cemetery in Clyde, Ohio for him. 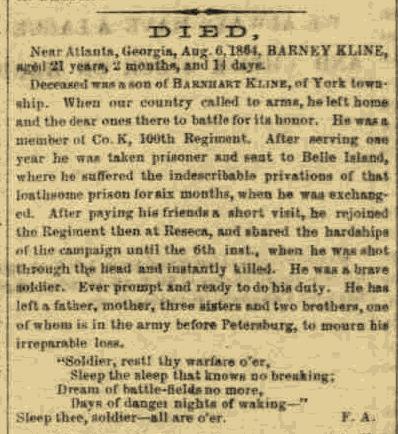 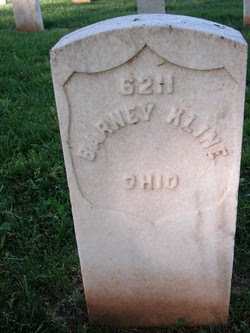 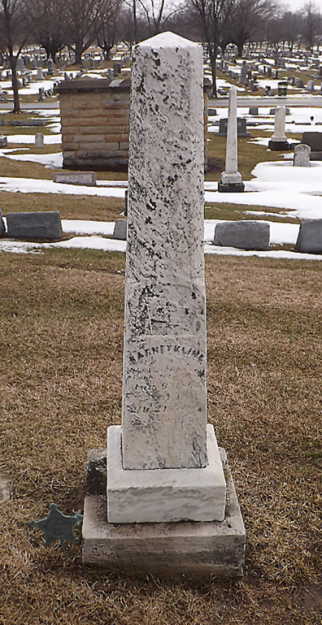 Centotaph for Barney Kline III, McPherson Cemetery, Clyde. Ohio
Note G.A.R star on the left side.
Peter Comstock Kline was named after his maternal grandfather, Comstock Chapelles (Rosetta Chapelles Kline), and was born on February 25, 1845.  His obituary gave a very complete summary of his life, except that he was married twice.  First, he married Helen Tichenor in 1872.  They divorced in December, 1885, at the request of Helen, on the grounds of willful absence for three years.  She was granted custody of their child - probably Russell. 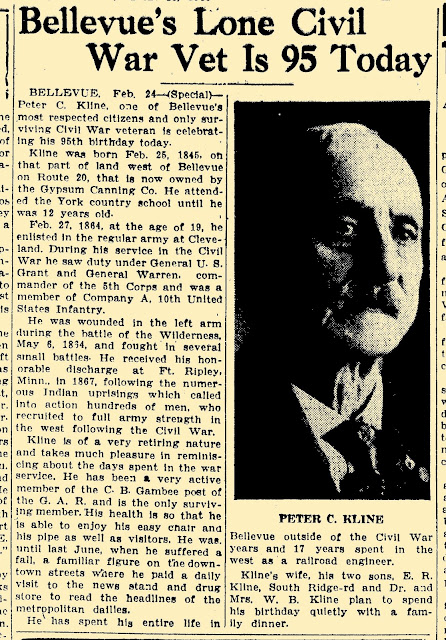 Another obituary added yet more facts to his life story:
"PETER C. KLINE, VETERAN OF CIVIL WAR, CLAIMED BY DEATH
Death claimed the life of Pete Comstock Kline, 95 year old Civil War veteran and sole survivor of the C. B. Gambee Post No. 33, G.A.R. at his home at 205 North West street at 11:50 p.m. Monday.  His passing was attributed to the infirmities of old age.  In failing health since June 12, 1939, when he suffered a hard fall on Main Street, Mr. Kline has been confined to hishome for over a year.  Despite the delicate condition of his health, his mind was active and he took a keen interest in world affairs which he followed nightly by listening to Lowell Thomas radio broadcasts.
PARADE PAID TRIBUTE
His last public appearance was on Memorial Day when the parade stopped in front of his home to pay tribute to the city's last Civil War veteran as he stood on the porch supported on the arms of war veterans.  A recent illness brought on by the intense heat prevented him from attending the Ohio convention of Civil War veterans held at Sandusky last weekend.
He received his host of friends at intervals during the past year and enjoyed their company  in spite of the fact he was unable to make his daily trips 'uptown.'  His death last night thwarted his ambition to reach 100 years of age.
Believed to have been the oldest resident of the city, Mr. Kline was born February 15, 1845 in York township on the homestead which is now the Gypsum Cherry Farm.  He was the son of Barnhart and Rosetta Kline.  He spent his early boyhood in this vicinity and remembered well much of the early history of the city and surrounding county.
ENLISTED AT 19
As a lad of 19, he enlisted February 27, 1864, in the A company of the 10 regiment of the U.S. Army at Cleveland and served three years in the Union Army before being discharged at Ft. Ripley, Minnesota, February 27, 1867.  He fought in five different engagements including the Battle of the Wilderness - May 6, 1864, Battle of Petersburg - June, 1864, and the Battles at Weldon railroad, August 18, 19 and 21, 1864. He was wounded in the left arm at the Bottle of the Wilderness and while in the hospital, he had the pleasure of shaking the hand of Lincoln who visited the wounded men.  From November, 1865 until his discharge, he was among the Indians in Minnesota at Ft. Ripley, Leach Lake and Crow Wing. 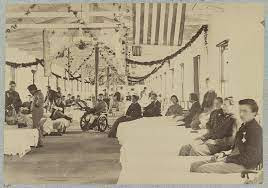 MARRIED 54 YEARS
During his active life, he was a farmer and a railroader, having been an engineer for over 18 years. On June 1, 1886, he was married to Jennie Stone, they recently having celebrated their 54th wedding anniversary.  Besides the local widow, two sons, Dr. Walter Kline, local dentist, and Russell, at home, survive.  A daughter died in infancy.
He has been an active Mason and served a four year term as Master of the Blue Lodge.  He also served several terms on the city council and held the office of Post Commander of the C. B. Gambee Post No. 33 for a good part of the last 50 years.  The organization originally numbered 163 members.  He was also an honorary member of the American Legion and Veterans of Foreign Wars.
Funeral services will be held Thursday at 2:30 p.m. from the Young funeral home with the Rev. D. J. Black officiating.  Burial will be in the Bellevue Cemetery. Mr. Kline will be accorded full military honors at the grave which will be in charge of the American Legion.  Members of the Masonic Lodge will be pall-bearers..." Henry Edward Kline
Little could be found on this youngest son, Henry, born in 1847 and died in 1902.  His obituary was helpful in that it established that he never married and had no children.
In the Bellevue Gazette, August 21, 1902:
DEATH OF HENRY KLINE
Henry Kline died Wednesday, at eleven o'clock a.m. at Dr. Orwig's sanitarium on East Main Street, aged 56 years.  Mr. Kline had been in impaired health for several years and death was due to messenteric consumption.
Deceased was born and raised in York township and was a son of the late Barnhart Kline.
He was unmarried and leaves a sister in Michigan and one brother, P. C. Kline, the well known York township farmer.
Decease was an active member of the Blue Lodge Council , Chapter, and was also a Knight Templar, being a member of Norwalk Commandery. The funeral services were held from the home of his brother, P. C. Kline, at 9:30 o'clock Friday morning and at the Free Chapel at 10:00 under the auspices of Norwalk Commandery, Knights Templar.  Interment will be in Free Chapel Cemetery."
Posted by Dianne at 3:00 PM No comments: