Another Photo From Threshing Day


Aunt Alma Elling Hicksted wrote in her memoirs, " Then came the threshing days.  They were fun for us kids, and I think the women enjoyed themselves, too.  It gave them a chance to get together and bake and cook bountiful meals for their men and families. 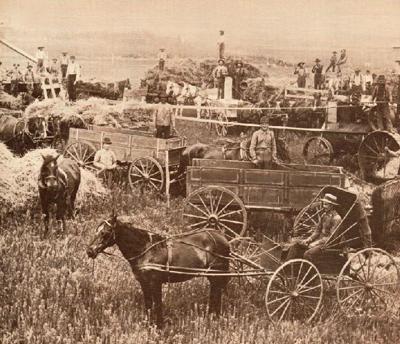 There were lots of children and the older ones had to watch the younger ones.  Sometimes they were at one place for dinner and another one for supper.  And what good, big meals they cooked.  And the desserts - especially the pies and cakes.

About 9:30 a.m. was Frustuch or what is now called break time.  Sandwiches and cold water were taken to the men as they had worked long and hard already - usually bologna, summer sausage, and cheese sandwiches.  Then sometimes we had to walk from one place to the next and always several little ones in buggies.  On occasion we were lucky and a farmer would be going with a team of horses and wagon and would help the mothers put the buggies and little ones on his wagon and we would ride to the next place where threshing was to be done.  Even at that, those were such fun days.

The photo below came from Alma and it is marked as a threshing day photo taken at a farm not far from the Seeman farm.  My father is in the buggy and he was born in September 1923. 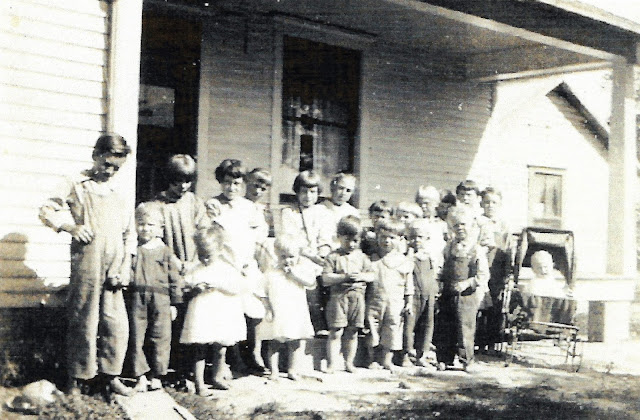 Her identifications: "From the left is Paul Elling, Alfred Elling, From the other end is Rudy in buggy.
Next to buggy in front row is Arnold Sunderman (I was confirmed with him) and next smaller one is his brother Raymond Sunderman and next to him is Alma Elling Hicksted, a towhead and the one behind me is Laura Sunderman Grobrogge.
The others I'm not sure of.  It's been too long, long ago.  I know there were some Meyers, Ludemans and the elderly lady is Minnie Seeman."
Posted by Dianne at 7:43 PM No comments:


I've started to spring clean some of the genealogy boxes - a task that is long overdue!  Starting with the Elling box, the first family that really started me on this hobby.  One day, after Dad Rudy had his terminal cancer diagnosis, he and I were at their kitchen table and he started on some family stories.  That led to family talk and who was related. Eventually a notebook and pen had to come out for some notes and there it was...the beginning of creating the family tree.

The aunts and uncles helped, too, in building the trail back to Germany, but Aunt Alma was the consumate letter writer and family historian. Her memory was excellent, and I think I've saved every carefully handwritten note from her. Today I came across one I had forgotten about from 2006.  Included in the bright, yellow envelope was a two page (both sides filled!) letter and several photos that will be shared on the blog.  How could I forget that she had sent these? 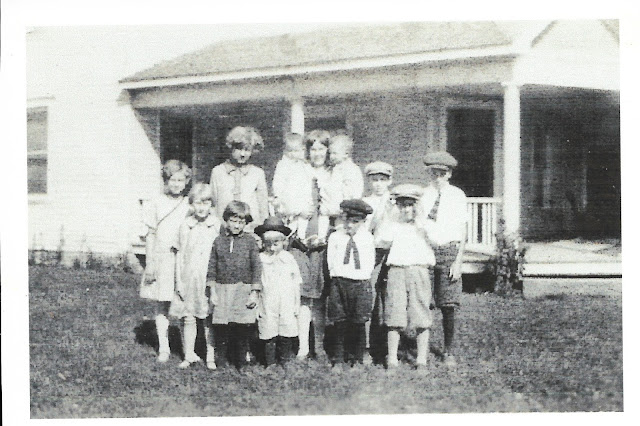 "This was taken on St. Rt. 65 south of West Hope at the Seeman farm.  We were visiting there on a Sunday night many, many years ago.
Front row L to R: Alma Elling, Dorothy Seeman Lange, Rudy Elling, Alfred Elling and Alvin Spoering.
Back row L to R: Elda Benien Arps, Emma Benien Rettig, Alma Seeman Rettig holding Wilma Seeman Lange in her right arm and Lorna Elling in her left arm (as it is facing us) Henry Seeman and Paul Elling"

My tow headed dad with the funny hat!  Al and Paul are looking so grown up with their ties and "big boy" hats.   I'm guessing this might be around 1926 or 1927?  What do you think?  The boys had their knickers on.

Posted by Dianne at 3:56 PM No comments:

Reasons for Coming to America

From the diary of Philip Jacob Maurer, during the sea voyage to America in 1833 -

"The thought came to me early in the month of October 1832 that I should go to America with my children.  From the moment I resolved to go I became happy and carefree.  It seemed as though that I was transformed.  At work and in marching I was never tired.  I could make a two hour march in one and a half hours.  Thank God for the wonderful gift of health and for a light and happy heart.

The conditions that influenced me to go to America are as follows:

1. The bad housekeeping of the State where the expenses are so great, and the princely household, the officers and the state officials are paid too high also the customs and the toll.  The land is cut into small parts so no one gets into a new land with each day's journey, and each land is encircled by a toll line.  Commerce is hindered.  The last cent is taken away from the common people.  Also the money must be changed and the people are again the losers.

2. Of complimenting and politeness and saluting there is no end.  One hardly knows how to frame his sentences so as not to offend.  Everyone wants to be addressed as THOU.

3 In the field and in the home one is robbed.  One cannot be careful enough.

4 Poverty is so universal that one has to hand out 10-15 pounds of bread daily.  Among these are many beggars.  One knows them but dares not to refuse them, because of what they may do.  They live in the next village and are very dangerous.

5. One cannot be too careful in the lending of money and grain.  One is cheated often.  There is no such thing as keeping one's word among the people.  When people need money or other things they give you angel words (Engleworte) but if you ask them in return what they borrowed, they become your enemies and call you heartless.  The returning of things is hard because they are so needy.  Many times one loses.  All confidence is gone and one dreads to help anyone, but still one has no peace from the borrower.

6. The Sabbath is deserated.  The good and upright person has to battle to stay in the straight and narrow path.

7. In spite of extraordinary taxes, the State debt gets higher and higher every year.  What will things come to when it must be paid?  According to the speakers at the Hambacher Festival, the State debt amounted to 124 million florin on the 27 May 1832.

8. The military duty is worrying me because of my five sons.

9.Friendship is seldom foung.  Greed and selfishness have taken the place of true friendship.

10. When it is necessary to go to the law,there is so much expense that many a lone loses his right.

12  In the several states of Europe one is robbed of all freedom.  A chain is thrown around the people and they are led like animals.  For instance, one may not take a dog to the field with him without a fine of 5 Fr.  One may not catch a rabbit, for the fine is 3 Fr.  Because of these things and many others, I am leaving Europe.  For these reasons, wealthy, prominent, and worthy men also officials and spiritual leaders, who are dissatisfied, resolved to migrate to the United States of America, where there is freedom."

Reprinted in the Palatine Heritage newsletter of November 1998.

Were these some of the issues that influenced Johann Friedrich Elling to leave Germany more than 25 years later in 1859?
Posted by Dianne at 3:21 PM No comments: