Posted by Dianne at 4:56 PM No comments:

I came across another old envelope of pictures recently and made some nice discoveries.  At one point, I remember my dad telling about a ride he took with someone in a two-seater airplane some time in the early 1940's.  (I wondered if there were several rides, as in the first photo below, the leaves are off the trees,while the other photos show full foliage.) While on his ride or rides, which he did not tolerate all that well, he took along his camera.
Here are some of those photos...maybe someone who knows the burg of Malinta better can recognize some of the landmarks. 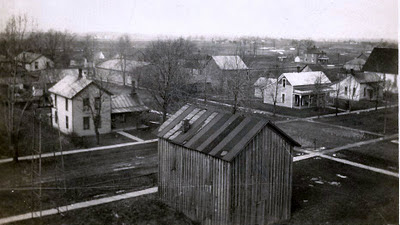 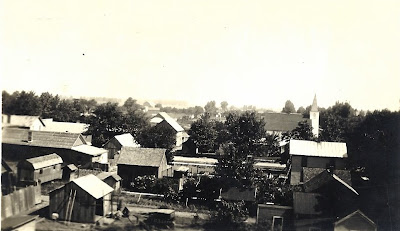 This photo shows a church
steeple to help orient us. 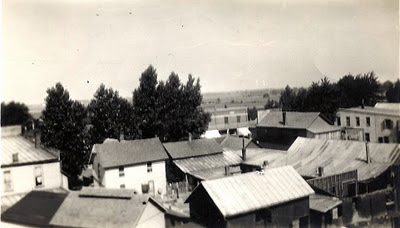 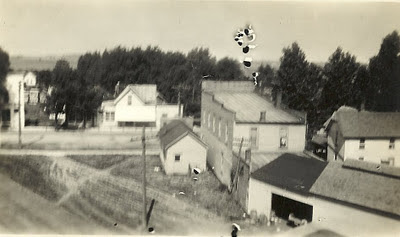 Also in the envelope of photos were several photos of the Gleaners, which I think was the elevator of the day.  A little research will tell the story. 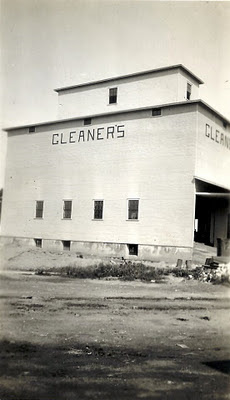 From Malinta and Grelton 1980, compiled by Mary E. Geist Mayer, p. 36
"The first grain elevator in Malinta was built in 1886...
Neil Dietrich explained, 'The grain elevator was always an important thing in Malinta as the farmers brought their grain here to sell it.  The unloading was
fascinating to me as a section of the floor was removed exposing a hopper into which the grain fell after the front wheels of the wagon were raised by a wench which was hand operated with chains with large rings that were out on the hubs of the front wheels.  Before the bank opened (in Malinta) about 1907 or 1908, all transactions were in cash...
For many years prior to about 1929 when the elevator was sold, it was owned by the Gleaners and later by a local company...Since the 1950's the Malinta Grain and Feed Company has continued to serve the area." 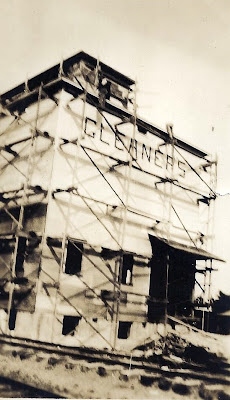 This photo shows scaffolding on the front of the building.

Could these photos have been taken, then, before 1929? 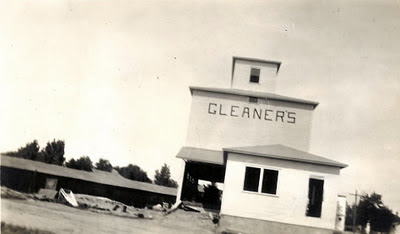 Posted by Dianne at 2:17 PM No comments:

Journey to Christmas - A DVD Review 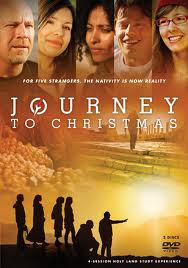 Journey to Christmas is a two DVD set, telling the story of five strangers with differing religious viewpoints who were taken on a twenty day visit to the Holy Land where they learned about the Christmas story in its very surroundings.  The group, all Canadians, consisted of a young agnostic with a Jewish father and Christian mother, a woman of East African origin who was an artist and a seeker in her faith, a young songstress who was firm in her Christian beliefs, a woman from the First Nations who questioned the tribal heritage of Jesus, and last, an older man who was skeptical and cynical about religion, but who wanted to be open to belief in Christ.  The group bonded during the journey as they followed the paths of the Wise Men, the shepherds, and Joseph and Mary.

The story was told not only through the visitors’ journey, but also with commentary from a local guide and scholars in history, archaeology and science.  This enriched the tale and helped the viewer to understand more thoroughly the culture and political climate of the day.  From riding camels through the desert along the Spice Route to Masada and the caves where the Dead Sea Scrolls were found,  to Nazareth, Capernaum, Jerusalem and finally Bethlehem, they transported to experience the life of the people of the times.  They viewed magnificent art, temple and city ruins, replicas of ancient villages, and the places related to Jesus in the city of Bethlehem.
The photography was spectacular!

Wow!   I was mesmerized by this journey and especially appreciated the local guide’s information and the insights provided by the historians.  The discussions among the travelers was interesting because each brought a different perspective to the journey, although viewing the same sites.  Some were totally transformed through this experience and others not so much.  One traveler, Dusty, commented in Bethlehem that she learned that “Christmas has nothing to do with red and green…it is about what he did for us…Christmas changed for me.”  Drew, who said he was “desperate for God” became more spiritually thirsty, but was perhaps the least changed among the group.  One of the final scenes showed the participants reading the Christmas story together while in Bethlehem .  What could be more moving than that, considering especially all that they have seen and done in preparation for that moment?

I highly recommend this set not only for individuals, but also for groups who will find much to discuss and study from the encounters of sojourners.  The set is called a “4-session Holy Land Study Experience.”

*This DVD set was provided to me by Tyndale Publishing for my review.  The opinions given in this review are mine alone and were not determined by the publisher.
Posted by Dianne at 9:05 PM 1 comment:

Email ThisBlogThis!Share to TwitterShare to FacebookShare to Pinterest
Labels: Journey to Christmas

Thanks Again to All!

A belated thanks to all who planned the first Jason Kline Memorial Golf Tournament - especially Kenny, Mark and Keith. Also thank you to all who golfed or worked, purchased raffle tickets, donated prizes and/ or donated to the scholarship fund in other ways. It was a huge success and, even though it was a brisk day, the golfers hung in there to complete their rounds. 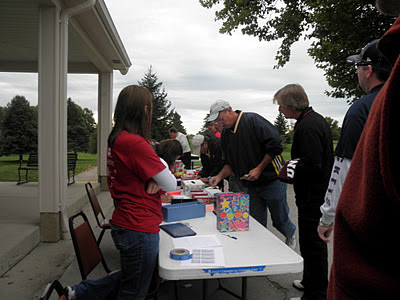 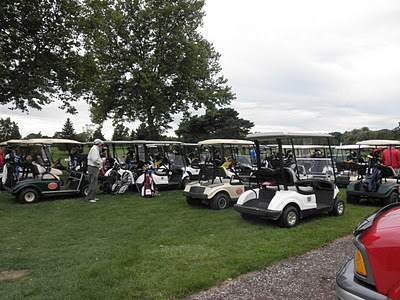 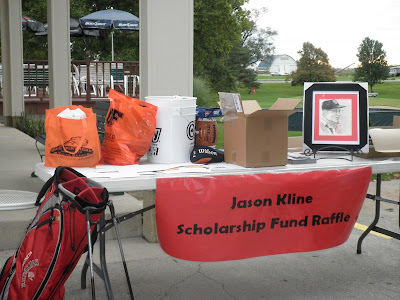 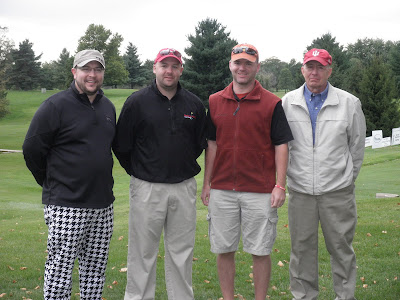 Again, THANK YOU!
Posted by Dianne at 3:54 PM No comments:

Get-Away Along the Ohio River

A few weeks ago Hubby and I decided to take a four day trip into southern Indiana, taking only the two lane highways when we could.  Our goal was to stop in Nashville, IN and Madison, IN and then to highway along the Ohio River into Ohio and back home. 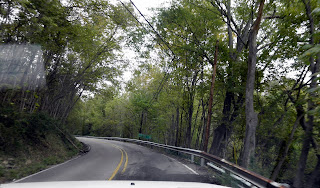 Driving on the back roads reminded me of the trips to Florida we took as children with our parents in the 1960's.  No I-75 existed, so getting to Florida meant cruising the hilly backroads of Kentucky and Tennessee, car sickness, Mom and Pop restaurants and motels and lots of nature to view.  Of course, we didn't appreciate those nature views so much then, but we sure did eat hamburgers and French fries for about ten days straight! 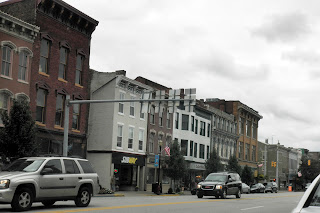 After an overnight stay and a theater stop in Nashville, we headed down to Madison and a visit with Hubby's cousin and wife.  Madison rests right on the Ohio River, has some very interesting buildings, and a lot of history. Below is the Ohio River bridge into Kentucky at Madison. 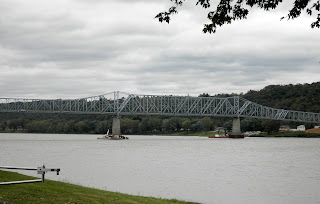 Some of the most interesting sites for me were the tobacco fields along the river, the tobacco barns, and some of the old homes built with river rock. 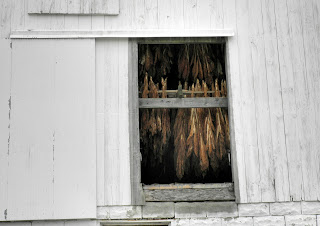 We ended the trip in Columbus with sister and family and dinner at the steakhouse.  A wonderful fall weekend!