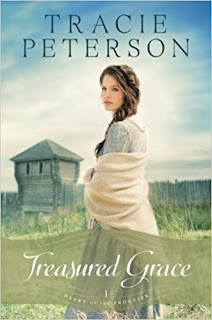 Leading off the new Tracie Peterson series, Heart of the Frontier, Treasured Grace introduced the sisters, Grace, Hope, and Mercy.  Grace, the main character, was the widow of Rev. Martindale; it had been a marriage of convenience as he needed a wife in order to set up a mission in the west and she and her sisters needed a way west after the death of their parents.  Grace was a respected healer among the people of the wagon train, but when she tried to use her gifts at the Whitman mission, Dr. Marcus Whitman grew jealous and refused her the right to do so.


At the mission, she met Alex Armistead, a Canadian fur trapper, and although they both wanted to deny it, there was an attraction between them.  When the measles epidemic broke out among the people at the mission, it also affected the nearby Cayuse Indian tribe.  Because so many died, the Indians blamed this on Dr. Whitman and took their revenge in a horrific way.  Grace was away, helping a friend during the raid, but her two sisters, especially Hope, suffered greatly from the attack. Alex was always there to be of help, but in indirect ways, as he had so much on his conscience from his early days.  He had grown apart from God, while Grace held fast to her beliefs. Their spiritual journeys are part of the story.

If you like historical fiction, you will enjoy this realistic story concerning the journey to Oregon and the missionary, Dr. Marcus Whitman.  The hardships of the trail and the fear of Indian attack were real to the early settlers and were well described.  Yes, Grace seemed to be tough at times, but then she had to be to survive herself and to help others.   I look forward to the upcoming books in the series.

This book was provided to me by Bethany House for my honest review.

Posted by Dianne at 6:47 PM No comments: