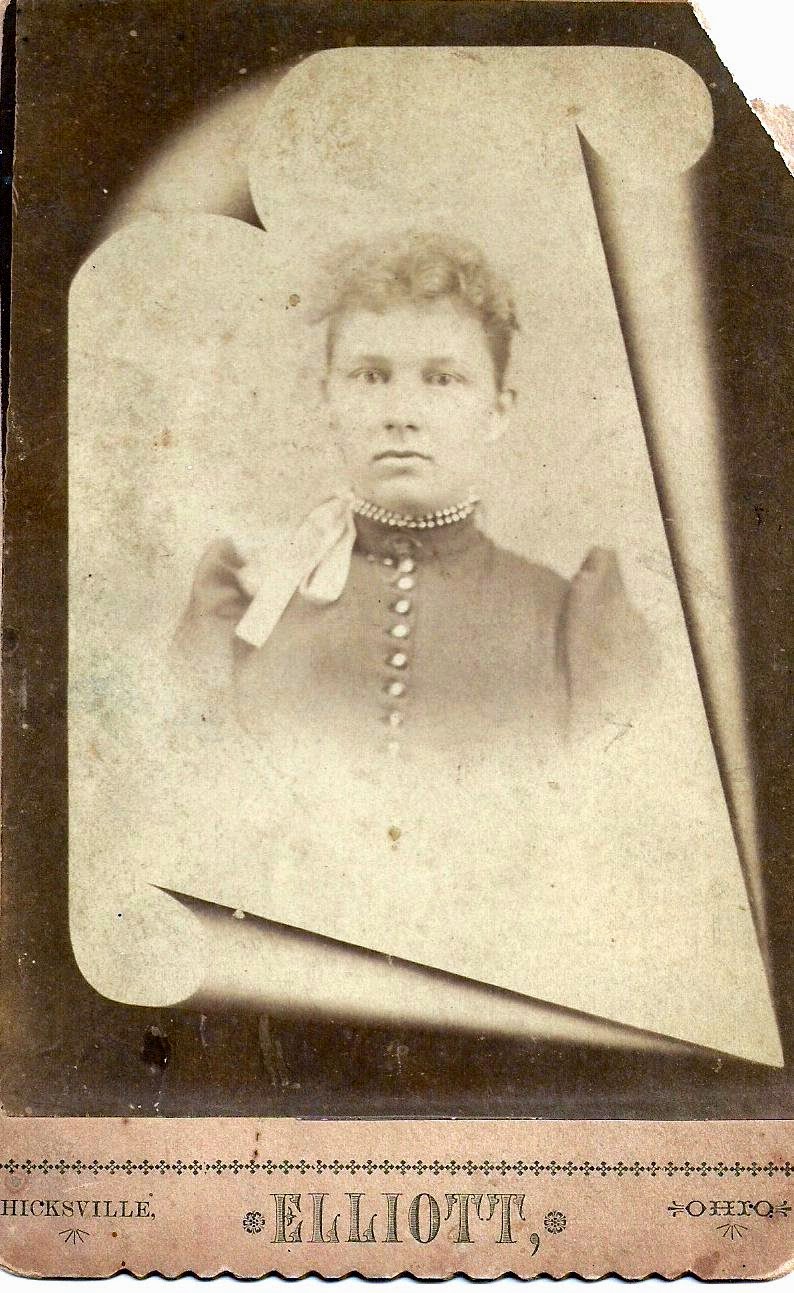 Emily Anna Meek was the only daughter of Samuel and Eliza (Fuller) Meek.  Born on October 25, 1871, she joined a family of five brothers - David, Solomon, William Oscar, Hiram and Sherman T.  She was the youngest child until the sixth and final sibling, another brother - John - was born in 1874. It would seem that Emily was named after both her grandmothers: Emily for her maternal grandmother Emily Camp Fuller and Anna for Anna Cooper Meek, her paternal grandmother.

Emily's father, Samuel was a farmer on a farm in Hicksville Township, Defiance County, Ohio.  Emily attended the Six Corners School, and several newspapers of the time named her as a champion of the spelling bees.  Her scrapbook, featured in this post, also included a number of Rewards of Merit.  Rewards of Merit were popular in the latter part of the 19th century and were awarded by teachers to students who showed outstanding academics, conduct and/ or attendance. 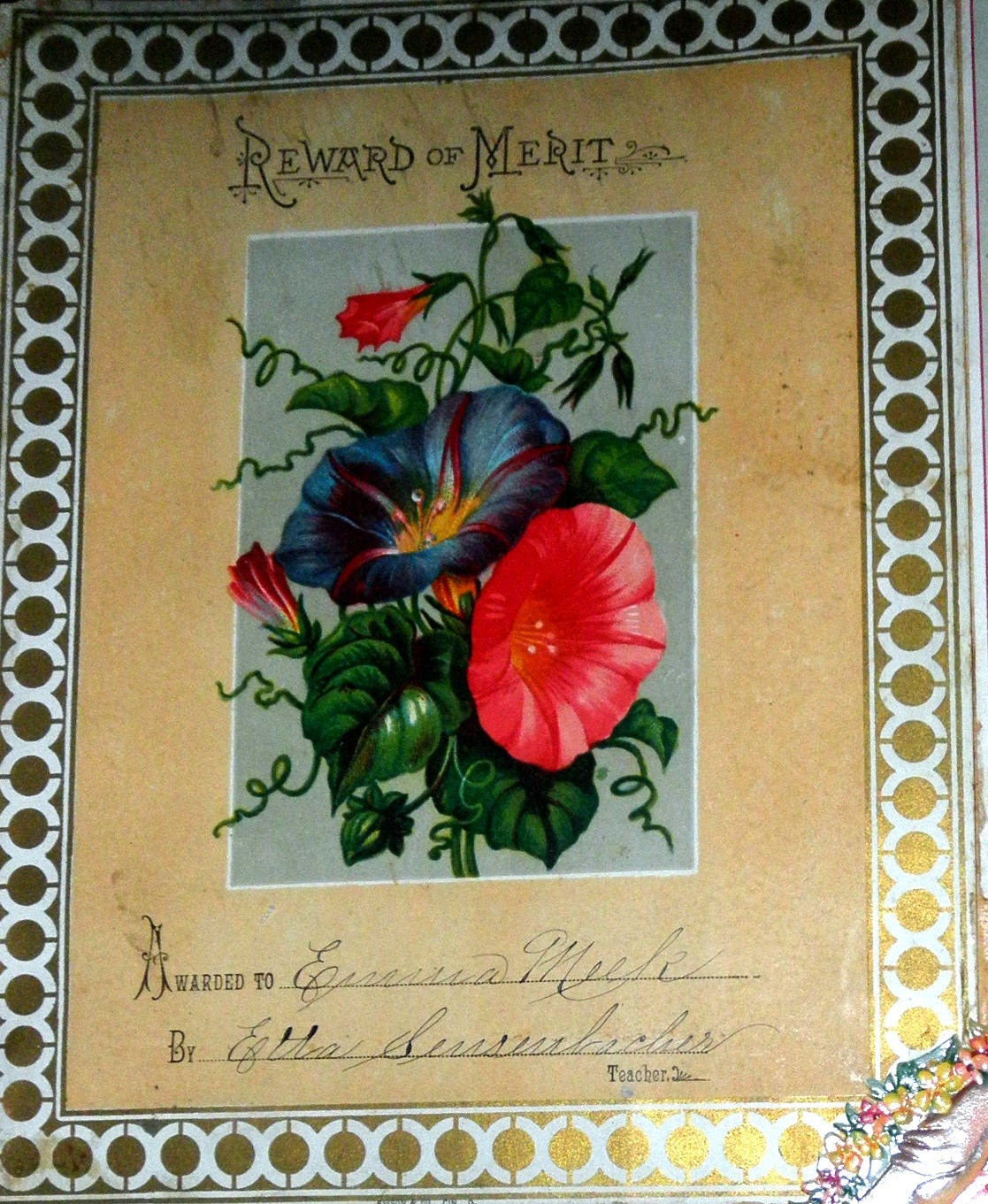 Often called "Emma", Emily Meek received Rewards of Merit that were signed, but not dated, from the following instructors: Rosa Hilbert, Andy Zuber, Etta Sensenbacher, Tildie Bercaw, Samuel Dalrymple, M. M. Hattery, Ella Butler, and M. R. Evritt.  If she went to school just eight years, as was common then, she would have received one every year.  Family lore is that Emily then taught in the Six Corners School for some years, but a recent source also recorded that she once taught at the Crary School in Milford Township.

In the 1900 census, she was with her elderly parents at home.  But, when she was 30 years old, she married Daniel F. Kline, a newcomer to the area from Hocking County, Ohio.  Daniel was also 30.  The marriage license, dated January 16, 1902, noted that she was a teacher and Daniel was a farmer with his residence in Hocking County.  The couple were married on January 19, 1902, by Rev. Geo. W. Lilly.  Emily's father, Samuel, died the following August at the age of 78. 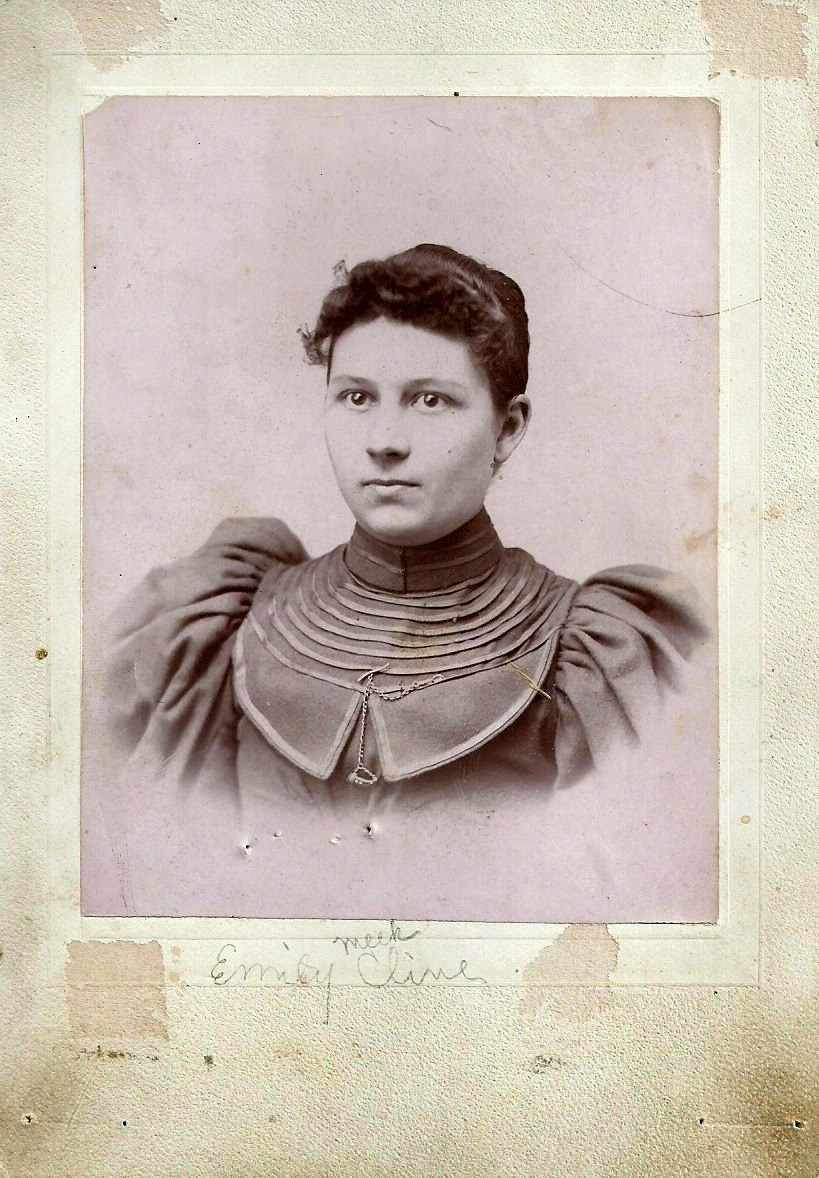 Emily and Daniel eventually moved to a farm just across the Ohio - Indiana line in Newville Township, Dekalb County, Indiana.  There they welcomed their first son, Boyd, on June 21, 1903.

The children attended school a mile or so down the road from their farm, at the Newville Center, one room school.  Life was the hard farming life of the Depression days where it was pretty hard scrabble most of the time.

On June 30, 1932, Daniel moved back to Hocking County, Ohio, and Emily filed for divorce after thirty years of marriage.  Daniel left the farm to Emily and the children and it is unknown how much contact he had with the family after that. The livestock was sold except for a milk cow and a few chickens and the money split.  Emily wanted $5000 in alimony, but she was awarded $1700 and court costs.  It was not a friendly split.

In the 1940 census, Emily, 68, reported herself as a widow, perhaps a more socially acceptable term than divorced.  But, truly, Daniel Kline was very much alive in Hocking County, Ohio.  Emily was listed as head of the family and with her were only her two surviving sons, Maurice, 27, and Woodrow, 25, both still single.  Maurice noted that he worked on the farm 60 hours a week, and Woodrow had a job as a section hand on the railroad half the year, making $480 in that time.  I would expect that he helped on the farm the rest of the year.
Emily Meek lived out her life on the farm until she died on May 6, 1942, at the age of 70. 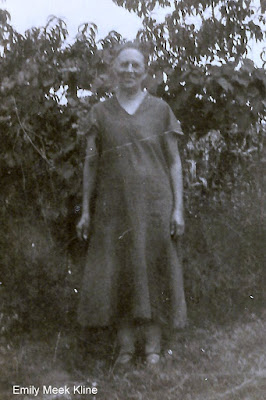 She was buried near her old home grounds at the Six Corners Cemetery.

The Hicksville Tribune, Hicksville, Ohio, carried her obituary on May 7, 1942:

Mrs. Emily Kline, aged 70, died Wednesday morning at her home in Newville township, four miles west of Hicksville.
She had been ill about three weeks, her death being unexpected and somewhat sudden.  Complications and heart trouble are stated to be the cause of the death.
Mrs. Kline was born Oct. 28, 1871, in Hicksville township,near Six Corners, and was a daughter of Samuel and Eliza Fuller Meek.
She grew to womanhood in the local neighborhood, and January 19, 1902, was united in marriage with Daniel Kline of Hocking county.
She had lived in the present home for thirty-five years.
Surviving relatives are three daughters, Mrs. Gladys Impton, near the home; Mrs. Hazel Bennett of Edon, O.; and Mrs. Mildred Cook of Paulding; two sons, Maurice Kline of St. Joe, Ind. and Woodrow Kline at the home; three grandchildren; a brother, John Meek of Bryan.
the body was taken to the Perkins and Reeb funeral home. Complete funeral arrangements had not been completed, as to place and time, but burial will be made in Six Corners Cemetery."

Posted by Dianne at 6:03 PM No comments:

Two more old school photos were found recently showing classes from the Moore School, grades 1-4 and grades 5-8.  My guess at the year would be around 1939, but it's only supposition.
The photos, sadly, were unidentified, but maybe someone out there can help put some names on these children's faces. 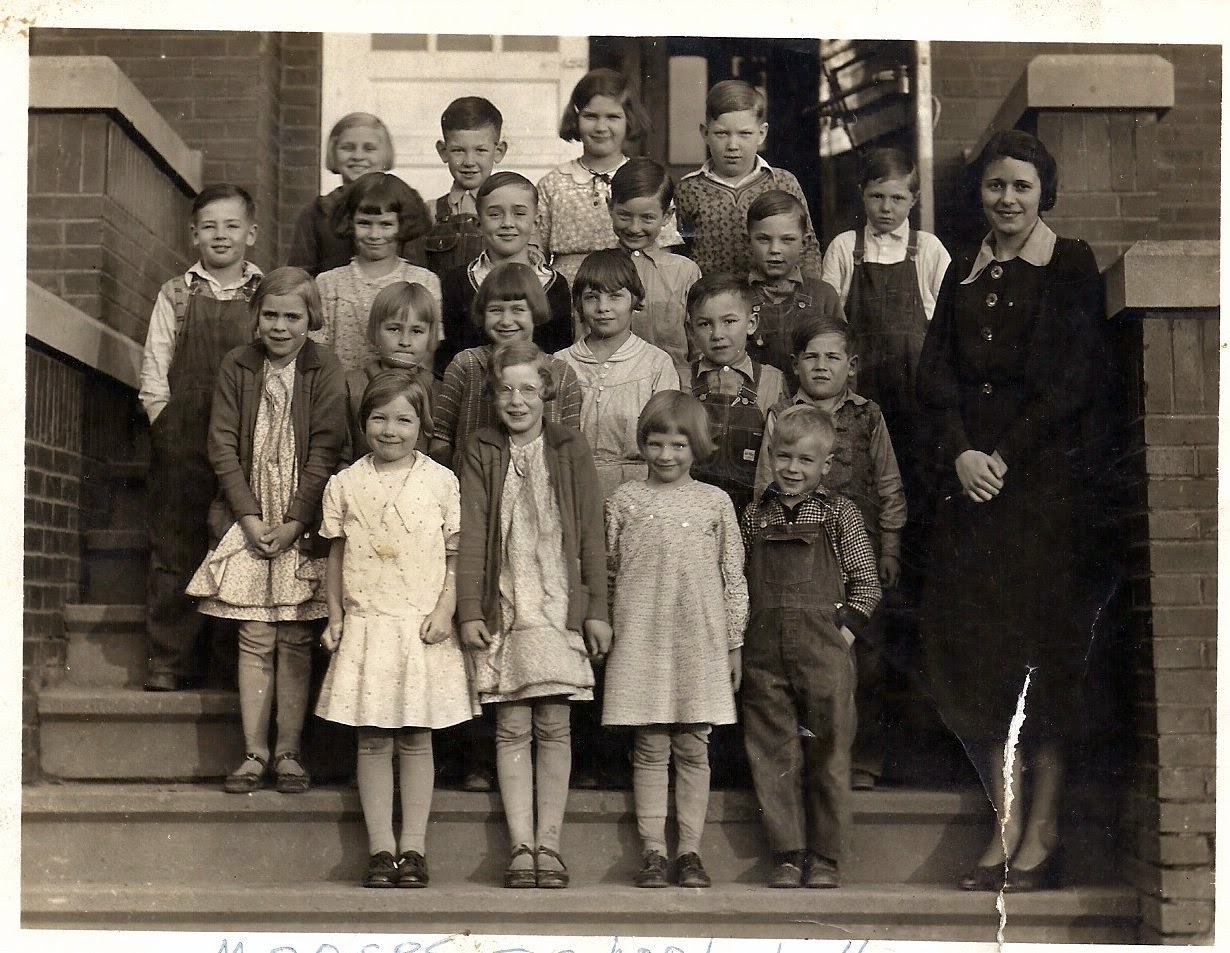 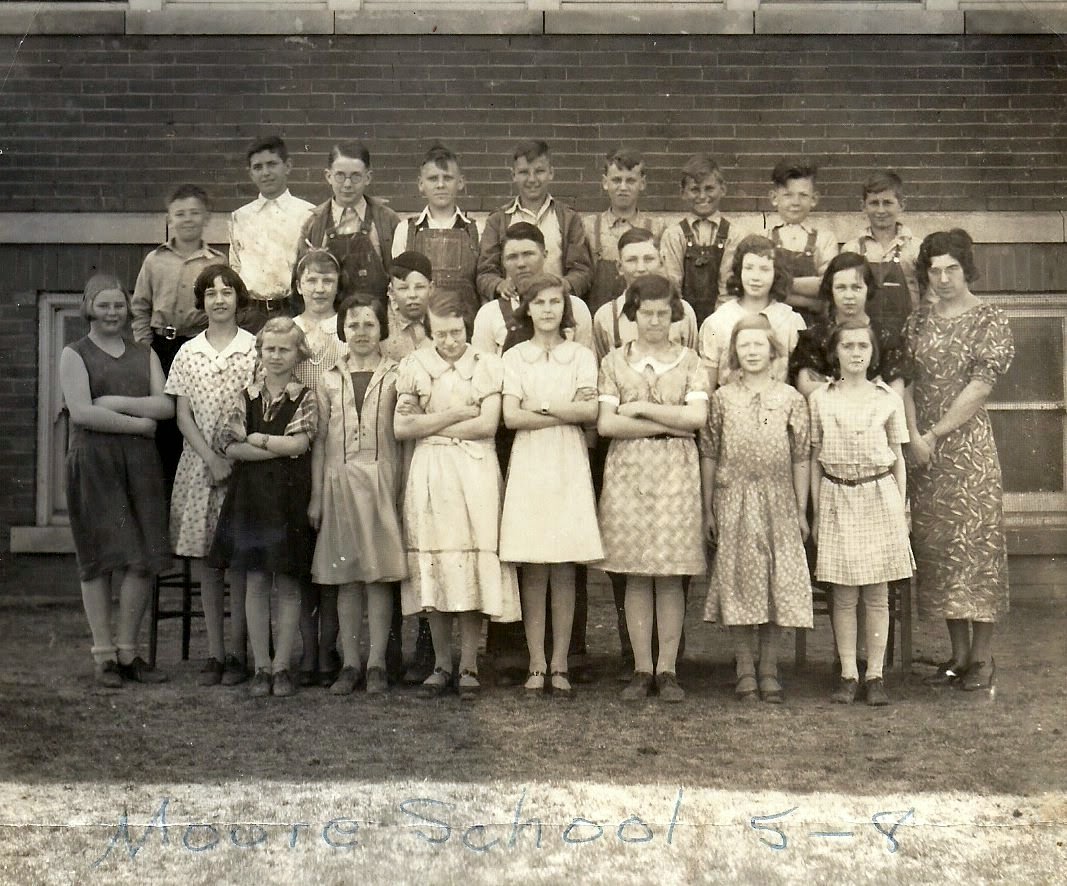 Posted by Dianne at 5:55 PM No comments:

A newly discovered obituary will add to the post about Jacob B. Hollabaugh and his wife, Clara.
http://www.attheriverbend.blogspot.com/2013/06/jacob-bittinger-hollabaugh-eighth-child.html

"Services Thursday for Mrs. Hollabaugh
Funeral services for Mrs. Clara Hollabaugh, 83, who died Monday afternoon at 2 o'clock from a heart attack while enroute to the Warner hospital in an auto, will be held Thursday afternoon at 2 o'clock from the Bender funeral home conducted by the Rev. B. W. Sternat, Biglerville.  Interment in Evergreen Cemeteray.
Mrs. Hollabaugh was a native of Adams county, a daughter of the late Henry and Martha Matilda (Lawver) Pottorff.  She was a member of St. Paul's Lutheran church, Biglerville.  Since shortly after the death of her husband, Jacob B. Hollabaugh, Biglerville, on February 22, 1943, she madeher home with a daughter, Mrs. James Howe, 243 York street.
Surviving are two children, Mrs. Howe, and J. P. Hollabaugh, Biglerville; seven grandchildren two great-grandchildren, and one half-brother, John Cook, Orrtanna.
Friends may call at the Bender funeral home Wednesday evening."

Posted by Dianne at 4:36 PM No comments: