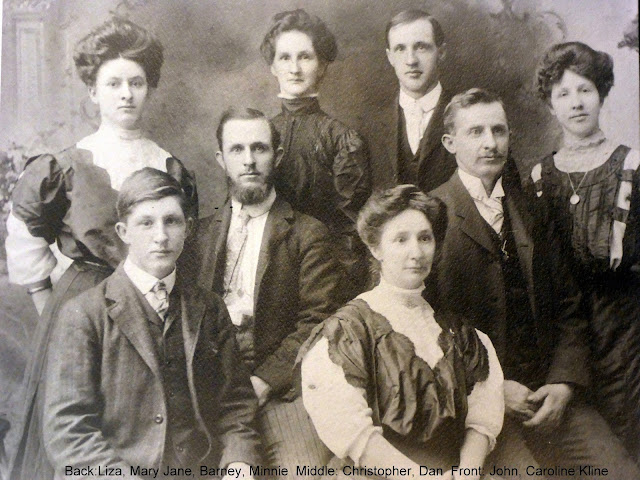 In the front right in this family photo was Caroline Kline, usually known as "Callie."  Callie was the oldest daughter in the family, born on March 31, 1874, in Rockbridge, Good Hope Township, Hocking County.  In the 1880 census, little six year old Caroline was found living with her parents and other siblings.


By the 1900 census, Callie had a job in the home of John H. and Frances R. Goss, working as a domestic.  She was twenty-six and living in their home.  Dr. Goss was a physician, then 62 years old.  It is unknown how long she worked here.

On September 16, 1906, Callie E. Kline married George W. (Washington) Pierson.  Neither had been married before and both were Hocking County natives.  George was the son of William Pierson and Lucinda Helber and a few years younger than Callie.

The couple lived in Green Township by the 1910 census, at the corner of the Shortsville and Logan Road.  George worked as a laborer in a sawmill.  When he died in 1911 at the age of 36, the couple had been married less than five years and had no children together.  George was buried at West Pleasant Hill Cemetery.

On December 31, 1913, Caroline married again to Darius Lafayette (Laffyet, Loffeyett) Nutter.  Darius, born in 1882, was eight years younger than his wife and was a farmer on his own farm, also in Green Township.  In 1920, they resided on Clay Hill Road.  They never had children, but they seemed to be successful farmers.  At one point, oil wells were being drilled on their property with moderate success, according to the papers.

Darius filled out both the World War I and World War II Draft Registrations which revealed his birthdate of June 19, 1882.  He reported himself as 5' 4", 117 pounds, with blue eyes, gray hair and a ruddy complexion on the second registration when he was 59.  At that point, the couple lived one mile east of the Fellowship Church, Route 1, Gore.

In September, 1930, Darius and Callie were involved in a lawsuit involving the will of one of their neighbors, Gideon Lowe.  Mr. Lowe was a farmer who lived alone after the death of his elderly sister.  During his final illness, Darius and Callie cared for him and were named as inheritors of his estate at his death.  At the time, no other relatives were known.  However, as soon as the terms of the will were announced, "a large number of relatives appeared," according to an account of the trial.  After a three day jury trial, the testimonies of many neighbors and friends, and with a 10-2 vote of the jury, the terms of the will favoring the Nutters was sustained.

Caroline Nutter died on December 2, 1955 at the age of 81.  She was buried with her first husband, George Pierson at the West Pleasant Hill Cemetery where her parents were also buried. 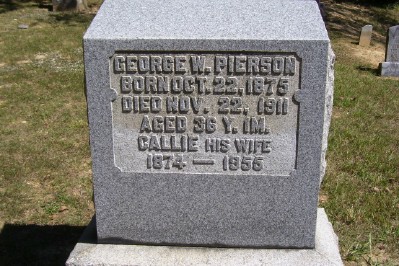 Darius lived on until June 8, 1969, when he died in a long term care facility at the age of 86.  He was buried in the Smith Chapel Cemetery, Logan, Ohio.  His obituary was in the Athens Messenger on June 9, 1969. 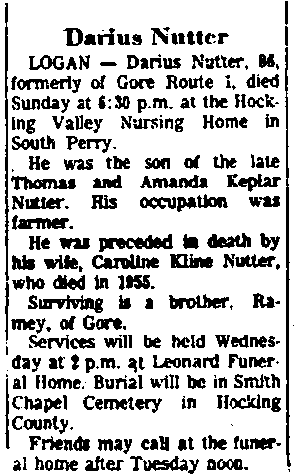 Posted by Dianne at 6:22 PM No comments: