Hermann Heinrich Wilhelm Elling, known as Harmon, was the fourth child of nine and the brother closest in age to our grandfather Albert. Harmon was born on October 17, 1891, in Freedom Township, Henry County, Ohio.
In the 1910 census, the census taker visited on April 15th and found Harmon living at home with his parents and helping out on the home farm.

On January 25, 1914, Harmon, at 22, married Helen S. Gerken who was 18. By the 1920 census, they were renting a home in Ridgeville Township, Henry County, Ohio. Harmon farmed and three children had been born - Lorence, Martin and Fredrick. (Census taker's spelling) 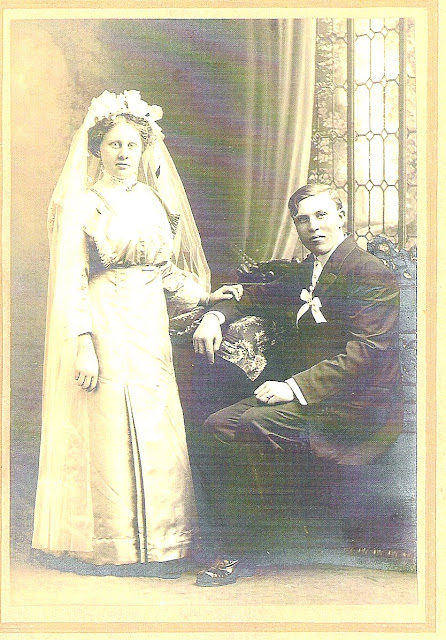 On June 5 in either 1917 or 1918, Herman registered for the WW I draft. He reported then that he had a wife and family and was farming. He gave his name as Herman and noted that he was of slender build with blue eyes and brown hair. Strangely, he wrote his birthdate as October 17, 1889 (the year his sister Kate was born) instead of 1891.

In the 1930 census for Monroe Township in Henry County, Herman, 38, and Helen, 34, were renting again and farming. Added to their family were Freddie, Eldor and Hildegarde.

At the age of 50 in 1942, Herman registered for the WW II draft, giving his address as Route 1, Napoleon. He said he was a self-employed farmer and gave his birthdate as October 17, 1891. He was a part of the "Old Man's Draft" and was really not expected to have to serve.

Helen died in 1991 and Herman in 1978. Together they had seven children: Lorenz, Martin, Fred, Eldor, Hildegarde, Leona and Richard.

He was born Oct. 17, 1891 in Freedom Twp., Henry County to Frederick and Marie (Rohrs) Elling and married Helen Gerken on January 25, 1914.  They were residents of Henry County all their married lives.  He was a member of St. John Lutheran Church, Freedom Twp., and was a former elder of the church.

Helen lived to be 94 years old, passing away in 1991.  Her obituary appeared also in the Defiance Crescent-News:

Services will be at 10 a.m. Saturday in St. John Lutheran Church with Rev. Kenneth Schroeder officiating.  Burial will be in the church cemetery.  Visitation will be 2-9 p.m. today at the Wesche Funeral Home.

Preferred memorials are to the church's general fund, Filling Memorial Home of Mercy or the donor's choice."

This post originally appeared on a former blog, Elling Family News, on February 16, 2009.

Posted by Dianne at 5:54 PM No comments:

Grandfather Albert's "baby" sister was Minnie, born on December 13, 1900, twelve years younger than he was.

Minnie married Arthur Miller in November 24, 1921. Living in Defiance, she worked at some area nursing homes, while her husband worked in Defiance at Defiance Milk Products. 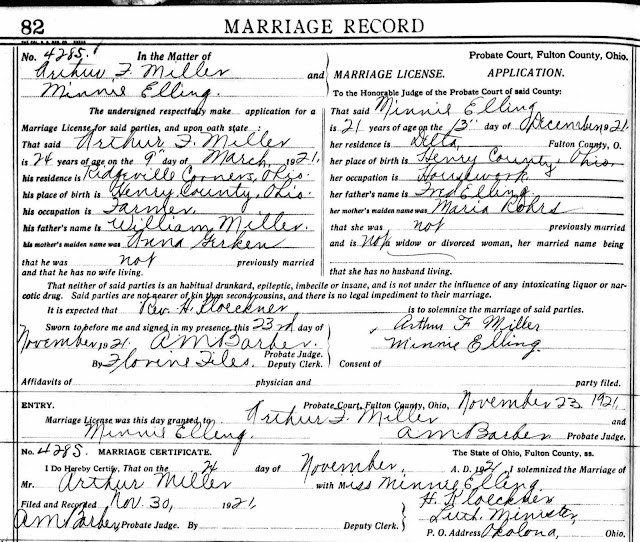 He lived in Defiance since 1931 and was an employee of Defiance Milk Products for 29 years, retiring 10 years ago.

Friends may call in the Mast and Mock Funeral Home after 7 p.m. Wednesday until noon Friday and then in St. John's Lutheran Church for an hour prior to the 2 p.m. services.  The Rev. David R. Koenig will officiate and burial will be in Riverview Memory Gardens.  Memorials may be made to the Sunday Morning Broadcast or Morning Meditations."

Minnie lived on until the age of 92, passing away on June 28, 1993, the last of Albert's brothers and sisters.  (An obituary for her was not readily available.)
She was buried with Arthur in Riverview Memory Gardens.

Posted by Dianne at 4:32 PM No comments:


The post originally appeared on the Elling Family News on January 11, 2009, as we were planning a big 2009 reunion.

Can you believe our last reunion was August 10, 1996? It was at the American Legion in Napoleon, site of our upcoming 2009 get-together. From this photo and from attending, I KNOW that everyone had a great time, so I hope you are saving the date - SATURDAY, AUGUST 8 - to come join us this year.

Also let's take a moment to remember those in this photo who are no longer with us. In loving memory of Hildegarde, Judy and Keith - all sadly missed.

And now we must add Uncle Alfred, Uncle Ron, Aunt Alma, Brooks and Jason to that memorial list.

Posted by Dianne at 6:23 PM No comments: 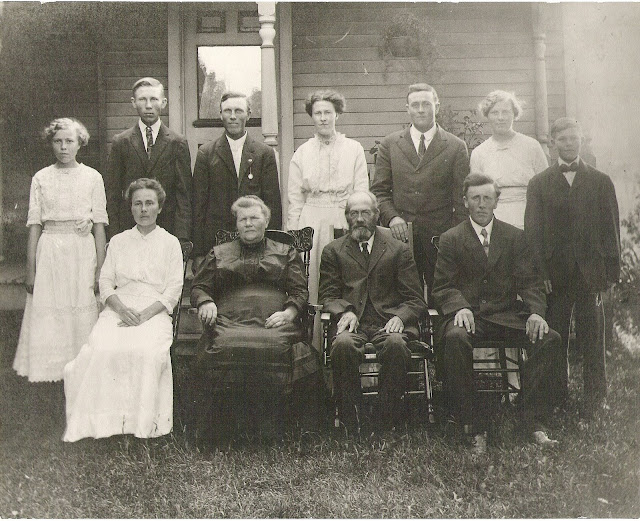 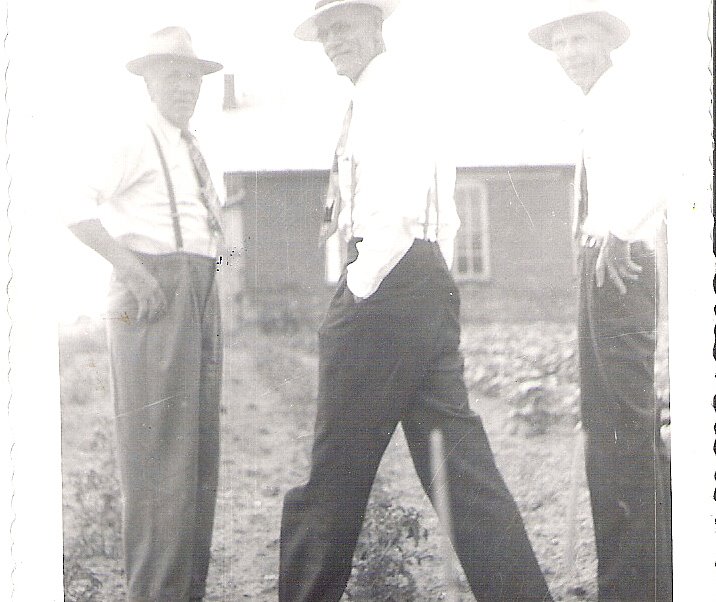 Albert Louis Johann Elling (1888 - 1969) was the first son and second child of the nine children of Heinrich Friedrich ("Fritz") Elling and his wife Maria ("Mary") Rohrs. Albert was born in Freedom Township, as were most of his brothers and sisters.


His eldest sister, Emma Catharine Marie Anna ("Emma") was born just two years before him on June 6, 1886. She eventually married John Scheele in 1906 and died in Napoleon in 1967.
His sister, Catharina Dorothe Anna Emma ("Kate") was born just a year after him on August 25, 1889. She married Henry Buenger and lived near Hamler.

I was able in interview his sister Minnie once and she gave great information for family research, along with a few photos. Minna E. was born in 1900 and died in 1993. She was married to Arthur Miller and lived in Defiance.
The youngest brother was Frederick H. ("Freddie") who married Nora Prigge and died in 1987.

This post originally appeared on the Elling Family News blog
on January 6, 2009.

In this photo, the woman on the right was identified as Ida (Huner) Elling, wife of Henry. The other woman is unidentified, but in comparing her face with the photo of the Elling family, I am almost sure this is Minnie Elling, Grandpa Albert's youngest sister. 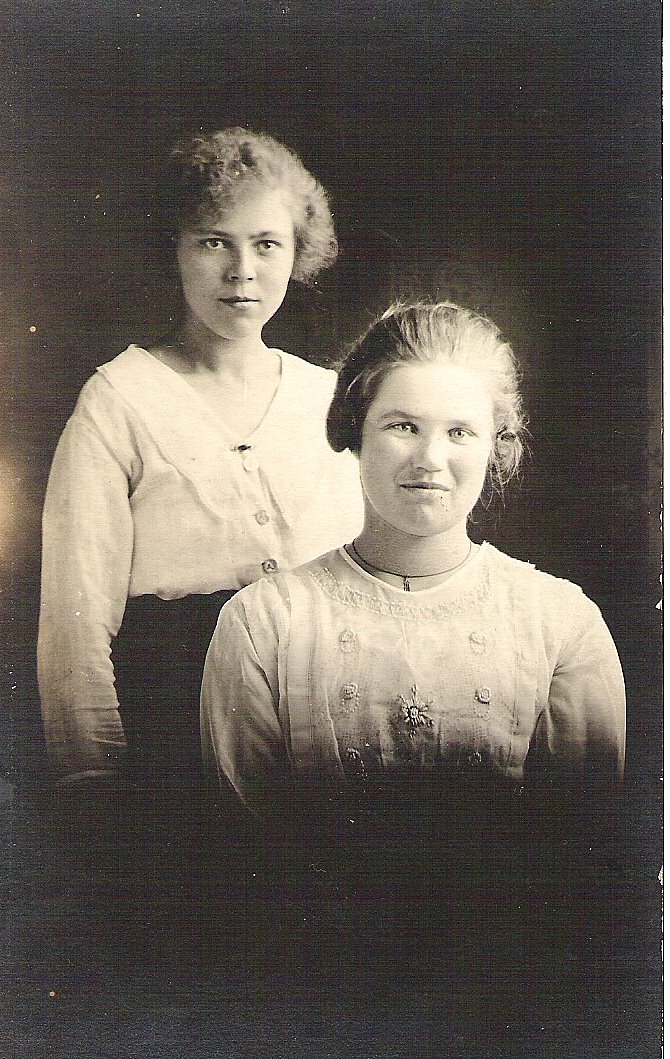 Compare photos for yourself. Do you agree this is Minnie Elling?

This post appeared originally on January 2,2009, on the Elling Family News blog.
Posted by Dianne at 6:02 PM No comments: 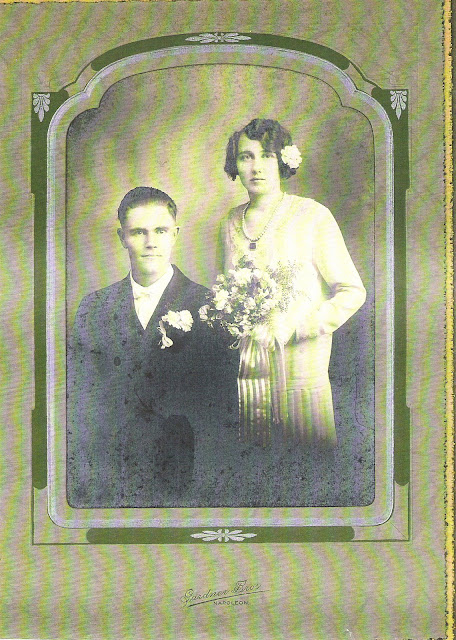 I couldn't find Freddie in the 1920 census, as he was not residing at home at that time. My best guess is that he was, at 17, a hired hand on a farm somewhere. I found his future wife, Nora Prigge, in the 1920 census. She was 13 and living with her 45 year old widowed mother and her siblings Dellia, Caroline, William and Fredie on a farm.

Freddie and Nora Prigge married on February 10, 1929. In the 1930 census, they lived with their children, Hildegarde and Marvin.  Freddie was engaged in farming.

The 1940 census revealed much about Freddie and Nora, including the fact that Freddie, like most farm boys of the time, finished 6th grade, while Nora finished 7th grade.  They lived in Harrison Township in Henry County and farmed there.  After 1953, they resided in Napoleon, Ohio.

Their children were Hildegarde, Marvin, Walter and Marie. Marie has done a great deal of research on the Elling family and has generously shared some photos and information with me. Thanks again, Marie!

Freddie died on Aug. 24, 1987, and was buried at the Forest Hill Cemetery in Napoleon. 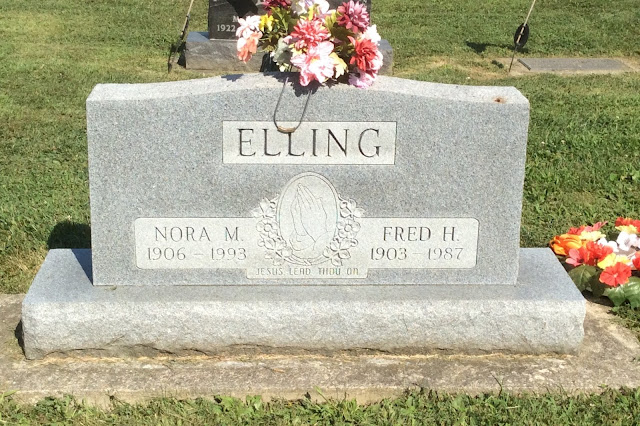 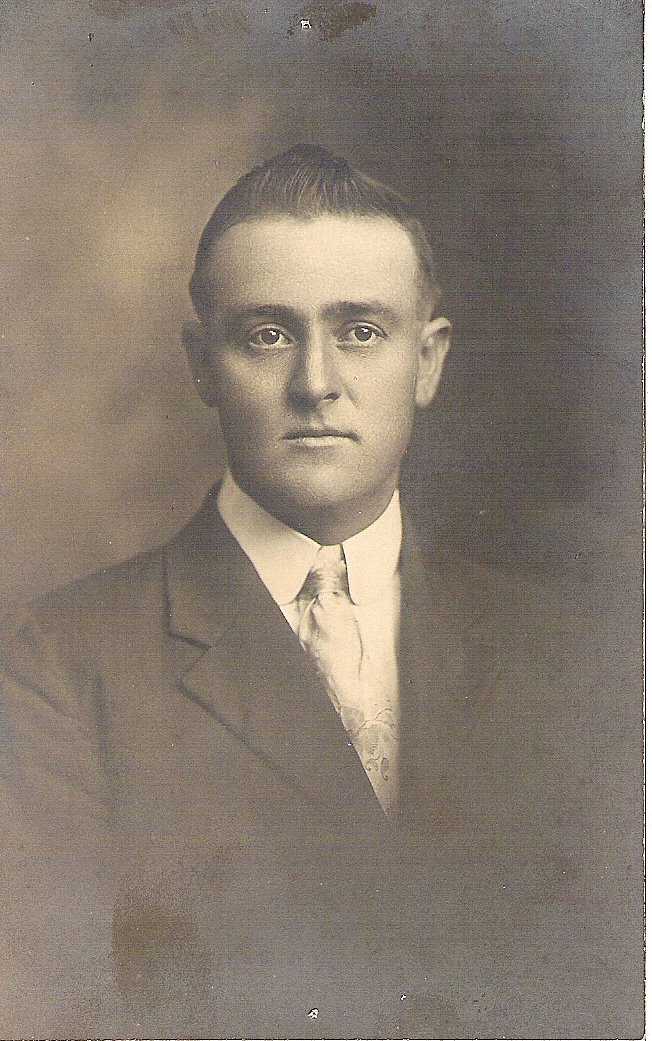 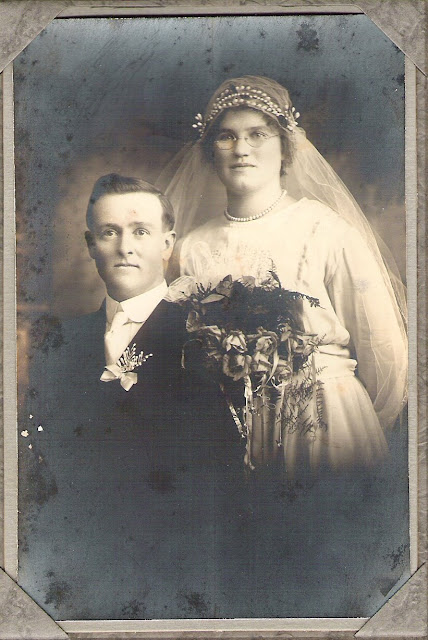 In his WW I Draft Registration in 1917-18, Henry was single and helping George Rohrs as a farmhand. On the registration, taken on June 5, 1917, in Henry County, Henry described himself as of medium height and stout build, with brown eyes and dark brown hair.  He claimed exemption from the draft because of lung trouble and bad hearing.  No evidence could be found that he served in the military.


In the 1930 Census, Henry lived with Ida and their four children in York Township, Fulton County, Ohio.  Henry was 36 and Ida M., 29, and with them were children Pauline, Laura, Martha, and Henry Jr.. The family rented a house, had no radio, and Henry worked as a farm laborer.

Henry and Ida left the farm in 1935 and moved to Hamler on Marion Street where they rented a house. He reported to the census enumerator in 1940, that he  was the proprietor of a restaurant, working 52 weeks a year, 72 hours a week.  At 46, he still had three children at home - Henry Jr., 12; Donald, 6; Luther, 1. With them lived his mother, Marie (Rohrs) Elling, 77, a widow born in Germany.  The family had also taken in a lodger, Charles Bergstedt, 48, divorced who was seeking work.

A big gap in time existed between 1940 and the next information found on Henry and Ida in 1970.  The article below would fill in a few gaps.
The Delphos Daily Journal ran a report of Henry and Ida's 50th wedding anniversary part on February 14, 1970. 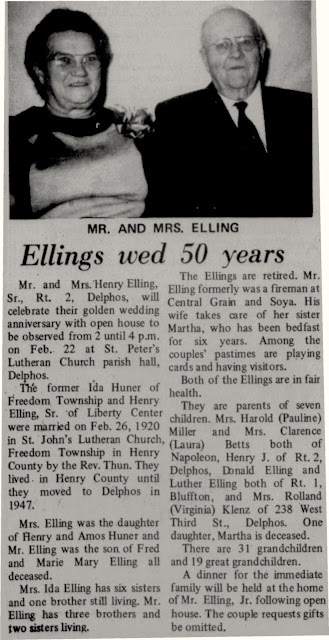 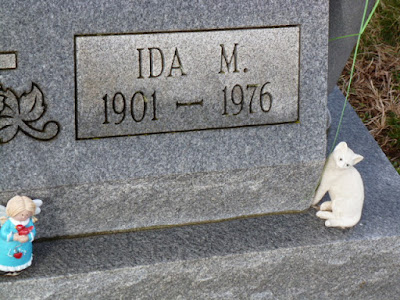 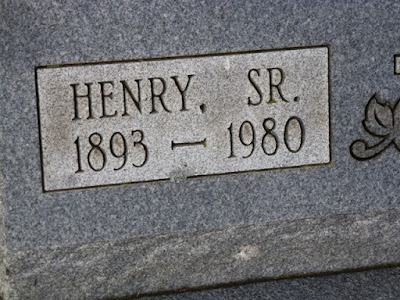 One of the great things about family research is that you meet so many nice people. One of Dad's cousins, whom I met only one time, gave me the originals of the photos above and a few others. I'm thankful for this blog so they can be shared.

Posted by Dianne at 7:04 PM No comments: 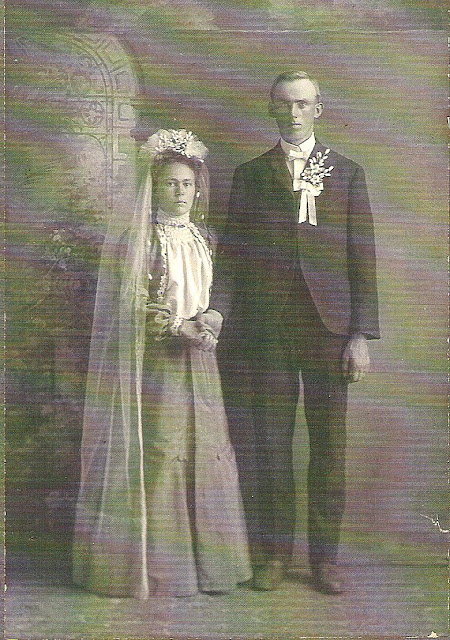 Our grandfather Albert had one older sister, Emma Catherine Marie Anna Elling, known as "Emma." She was just two years older than Albert, born June 6, 1886 in Freedom Township, Henry County. At the age of 20, she married John Scheele, who was 23 at the time, on November 15, 1906. In the wedding photo above, she looked very petite ... or John was quite tall.

It's always fun to follow the family through the available census documents. In 1910, John, 26, and "Emmie," 23, lived with their son Otto, 2, in Bartlow Twp., Henry county. John was farmed and Albert Meyers, 19, a hired hand, lived with them.

In the 1920 census, the family was still in Bartlow Twp. and John owned his farm which was mortgaged. He and Emma had five children listed: Otto, 12; Lerena (Lorena,) 6; Alvena 4; Ella (Elta,) 2; and Martha 2/12. John's occupation was Laborer, Hay Baling.

By 1930, the family had moved to Liberty Township in Henry County, and John was farmed there. Still at home was Otto, 22, who was listed as a Laborer, as well as the other children mention previously. Two children were added to the family: Marie, 8, and Arnold 2 7/12.

Daughter Lorena was missing from the family home in 1930, but at 16, she was the right age to be working for someone else and so she was. A closer examination of the census found Lorena (Sheeley) living with the Thomas Quinn family in Napoleon as a private family servant. Thomas Quinn was a medical doctor born in Michigan,but his parents were born in Ireland. His family in 1930 consisted of his wife, Mary, and nine year old son, Thomas.

An Aside...
Around the late 1950's or early 1960's, I remember that my Dad farmed some ground for "Doc Quinn." The farm was east of our farm on the Henry-Fulton County Line and many times my mom would drive (illegally, as she didn't have a license until much later) down to the farm to bring Dad lunch or dinner.

Back to Emma and John Scheele. John died on November 8, 1953, and Emma died on December 14, 1967. Their children were: Otto, Lorena, Alvena, Elta, Martha, Marie, Letha, Arnold. I didn't find Letha on the census, but she was named in notes from Marie Schnitkey. 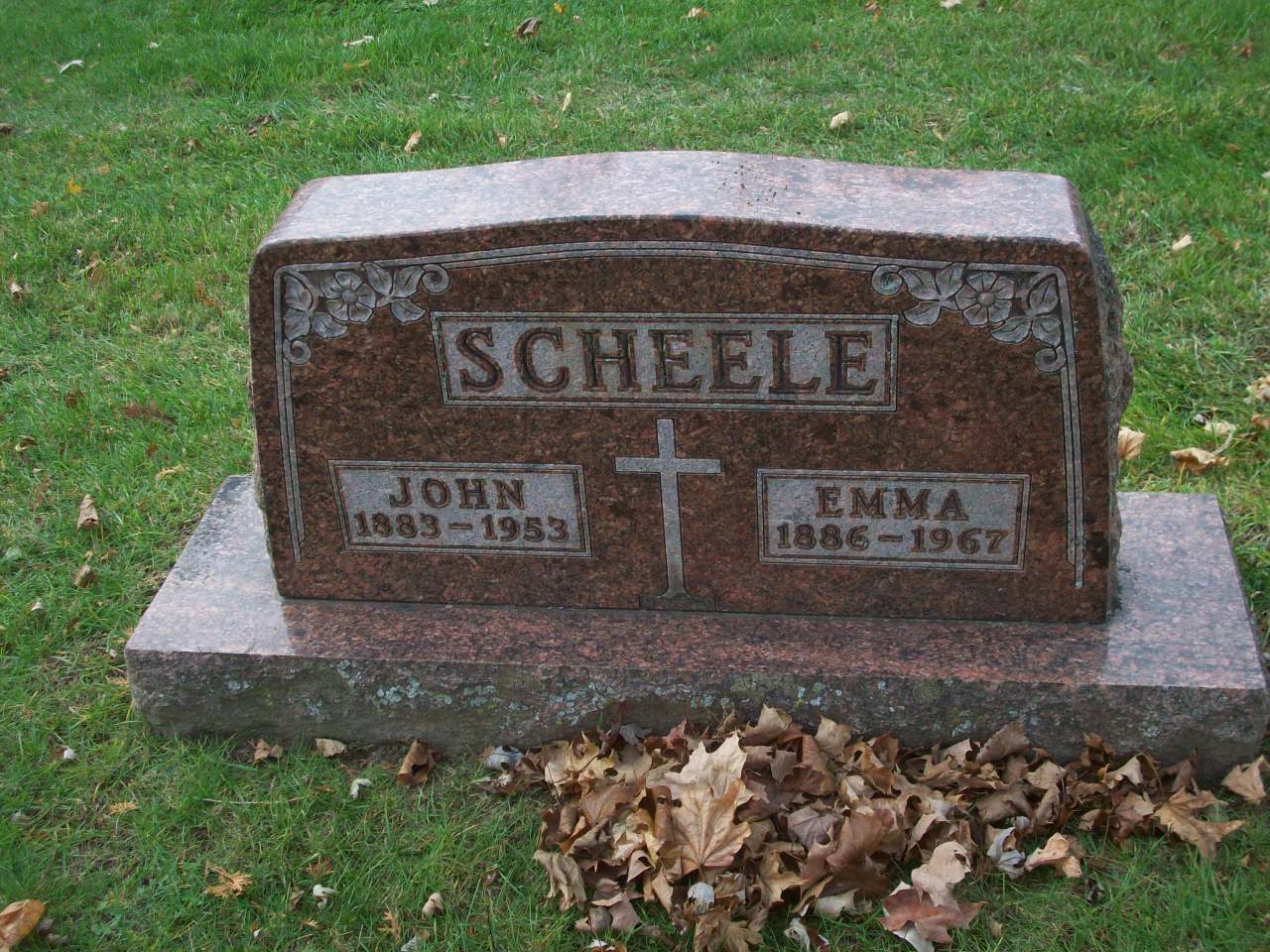 In February, 2009, this post appeared on my previous blog, Elling Family News.
Posted by Dianne at 8:35 PM No comments: