As was discussed in the previous post, our ancestor, Johann Hinrich Spoering, (1759-1811), an oldest son, inherited Farm 5, Stedebergen.

He later married Anne
Lucie Burdorf,
the daughter of Herman
Heinrich and Anne Mette
(Clason) Burdorf.  Anne was from the village of Geestefeld, which was about 2.5 km. south of Stedebergen. Anne and Johann Hinrich married on October 29, 1784, again at St. Andreas. Anne, born on February 28, 1766, was about 7 years younger than her husband. 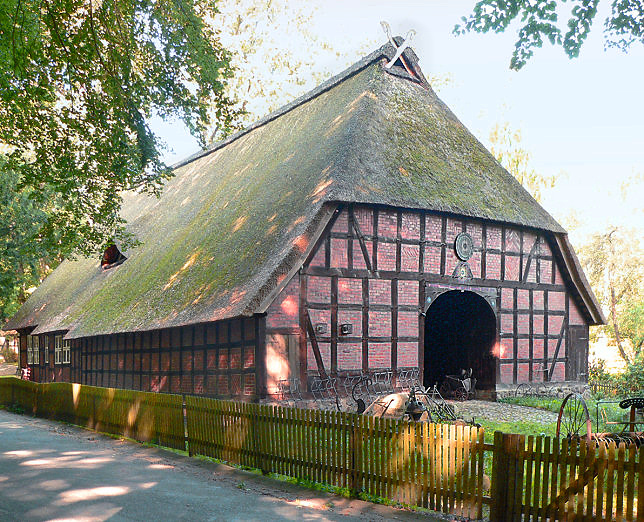 A house, in those days, would have the horse bays and the barn at one end and the living quarters at the other end.  A Low German timbered house is shown here.  Perhaps their home was more humble, we do not know.

We are aware of 8 children born to Johann Hinrich and Anne Burdorf Spoering:

The oldest was named after his father - Johann Hinrich, born February 27, 1786, on Farm 5.  This son married Catherine Margaretha Rebecke Schwarze.  As the oldest, he was the inheritor of the farm after the death of his father in 1791.
This son and wife had three daughters, and it was the oldest daughter (Marie Lucie Catherine Spoering)  who  inherited the farm  after her father died.  She married Hermann Wendte, but when she died young, at 27, her younger sister, Anna Dorothea Spoering, inherited and then married Mr. Wendte, her brother-in-law.
Although a woman could inherit a farm, under no circumstances was she allowed to manage the farm. So there was often pressure to marry or the daughter could hire someone as an interim manager until she found someone to marry or a son was old enough to do the job. According to my fellow researcher, Lydia, "It was considered unseemly in every possible way for a woman to run a farm on her own, and why you never see a single woman running one of our north German farms."
So, again, a guess would be that the second marriage of Mr. Wendte and his first wife's sister, Anna Dorothea, was one of convenience rather than romance.